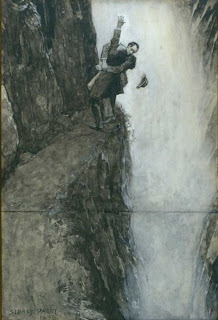 The readers of the December issue of The Strand Magazine are little prepared for the monthly offering from a favorite regular contributor, John H. Watson M.D.  The doctor writes: "It is with a heavy heart that I take up my pen to write these the last words in which I shall ever record the singular gifts by which my friend Mr. Sherlock Holmes was distinguished."

Thus begins "The Final Problem," the somber tale of the great detective's fateful meeting with Professor Moriarty, "the Napoleon of crime." Above Reichenbach Falls in Switzerland, a fearsome struggle ended with the two men plunging to their deaths. Watson concluded sorrowfully: "There, deep down in that dreadful cauldron of swirling water and seething foam, will lie for all time the most dangerous criminal and the foremost champion of the law of their generation."

Grief-stricken is not too strong a term to describe the reaction among those who had followed the detective's exploits since he first appeared in "A Study in Scarlet" in Beeton's Christmas Annual for 1887. The literary world had seen nothing like it since Dickens killed off Little Nell in The Old Curiosity Shop.  Angry letters, and a few threatening ones, filled the postbox at the Strand's offices. Black armbands enjoyed a vogue. "Keep Holmes Alive" clubs were formed.

The author of the Holmes tales, Arthur Conan Doyle, is in Switzerland with his TB-stricken wife, out of reach of his outraged readers. In his memoirs, he recalled growing tired of the detective story, regarding it as "a lower stratum of literary achievement." Visiting Reichenbach with his wife, he mused: "A terrible place, and one that I thought would make a worthy tomb for poor Sherlock, even if I buried my banking account along with him."

Conan Doyle would find success in other genres elusive and pecuniarily disappointing; few then and fewer today read, for instance, The Tragedy of the Korosko. Sherlock Holmes reappeared in 1901 in "The Hound of the Baskervilles," an instant best-seller. In 1904, "The Empty House" opened the long-awaited collection, The Return of Sherlock Holmes. Doyle wrote: "Fortunately no coroner had pronounced upon the remains, and so, after a long interval, it was not difficult for me to respond to the flattering demand and to explain my rash act away. I have never regretted it."

Sketch from The Strand, captioned "The Death of Sherlock Holmes."
Posted by Tom Hughes at 4:11 AM