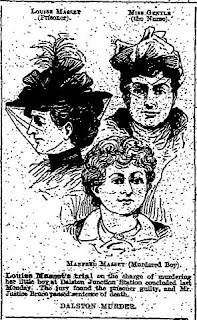 A London jury convicts Louise Masset of the murder of her 3-year-old illegitimate son. She will hang.

Louise was 36, French-born, and earned her living giving lessons in her native tongue to "children in respectable homes." She lived in Stoke Newington with a sister.

In October, the body of a boy had been found in the ladies room at Dalston Junction on the North London Railway. Police believed he had been first struck with a brick and, while stunned, suffocated. His clothes, bearing any tell-tale laundry marks, were removed and the body had been left naked beneath a shawl.  The horrible discovery received great attention in the press and a woman came forward to identify the child.  Helen Gentle, who lived in Tottenham, said she had been foster-mother to Manfred Masset but only a few days before she had returned the child to his mother.  Louise Masset had told her she was taking the child to his father in France.

Manfred's clothes and some of his toys were found in a dustbin at the Brighton rail station. Police soon learned that Masset had been in Brighton that very weekend, on a holiday with her new young man. Investigators also determined that the brick used to strike the child - while common enough - was the same paver used in the backyard at Stoke Newington. Louise told her sister, "I am being hunted for murder but I have not done it."

At her trial, the Crown argued that Louise, hoping to at last be married, found that Manfred was an embarrassing nuisance. In her defense, Louise offered a tale of two women from Chelsea, who were struck by little Manfred's beauty and offered to raise him for £12 a year.  That was considerably less than the Tottenham charges. Louise suggested that the Chelsea ladies simply took the advance payment and slew the boy. The prosecution scoffed and the jury hardly blinked. At the verdict, Louise cries, "I am quite innocent."

The Times - noting the clumsiness of the crime - concluded, "It is next to impossible to follow the workings of a feminine mind of the criminal type." Queen Victoria received a letter on behalf of dozens of Parisian governesses: "[We] ask a great Queen, who was always a perfect mother, to have pity for the unworthy mother who killed her child."

There was no respite; Louise Masset was hanged on 9 January 1900. Her last words: "What I suffer is just."

Sketch from the Penny Illustrated Paper
Posted by Tom Hughes at 5:42 AM