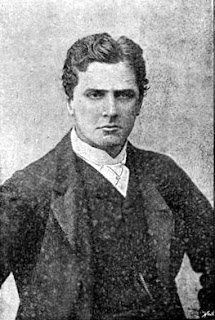 Only thirty minutes before the curtain is to rise on Gillete's "Secret Service" at the Adelphi Theatre, Covent Garden, the star of the play is stabbed to death in Maiden Lane.  William Terriss (left) had been attacked at the stage door, falling to the ground and screaming, "Oh. my God, I am stabbed." Reportedly, he dies in the arms of his mistress and co-star Jessie Millward, whose name is discreetly absent from newspaper accounts of the tragedy.

The attacker is immediately arrested, he makes no bid to flee. He is quickly identified as an unemployed actor known in the West End as the mad Archer." Richard Archer Prince surrenders his long kitchen knife to a constable, sneering at his victim, "He has had due warning. Mr. Terriss would not employ me, and I was determined to be revenged."

For some time, Archer - as he was known in the theatre - had importuned Terriss and others for money. Terriss had helped him repeatedly, until the man grew tiresome and he referred him to the Actor's Benevolent Fund, providing a letter of introduction describing Archer as "a hardworking actor." In reality, he was a supernumerary, an extra.

Terriss' death is tragically true to the melodramatic roles for which he had become one of the best known actors in London. While The Times had written "His fine voice and stately figure were natural advantages which largely made up for the lack of the higher qualities," the ticket-buying public loved him. When they buried "Breezy Bill" in Brompton cemetery, 50,000 people turned out. A floral wreath from the Prince of Wales was one of dozens on the coffin. The period's most famous actor, Sir Henry Irving defied public censure by escorting Miss Millward to the gravesite.

Archer was placed on trial; he plead "Guilty, with great provocation." The jury found that although he knew what he was doing and to whom, he was obviously not responsible for his actions. Declared guilty but insane, Archer spent the last forty years of his life in the madhouse at Broadmoor.
Posted by Tom Hughes at 3:40 AM