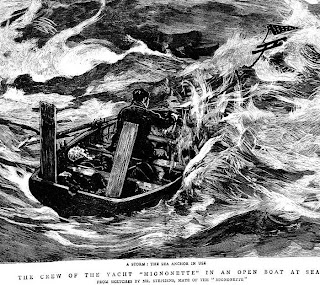 In extraordinary proceedings before the Court of the Queen's Bench in London, the captain and first mate of the yacht, Mignonette, are convicted and sentenced to hang in perhaps the most famous case of murder and cannibalism on the high seas.

The Mignonette had left Southampton in May, bound for Australia, but in July the yacht foundered and sank in the South Atlantic. After nineteen days adrift in a dinghy, the four man crew had exhausted all fresh water and food. Captain Tom Dudley, an experienced yachtsman, approached crewmen Edmund Brooks and Edwin Stephens with the idea of killing the fourth, Richard Parker.  The 17-year old Parker was comatose from having drunk sea water. A pen-knife to the jugular served, and the men then drank Parker's blood, ate the heart and liver, and nibbled on "left-overs."

Within days of "the 'orrid deed" the three survivors were picked up by a passing barque and brought to Falmouth. They kept no secrets from the local magistrates and "the Terrible Tale of the Sea" was soon known across England. The men were first to be tried at the assizes in Exeter but owing to the legal issues raised, the case had been moved to London before the Lord Chief Justice.  The prosecution relied on the evidence of Brooks who had turned reluctant witness, insisting he had nothing to do with Parker's murder.  He admitted, however, he had dined with the others.

Dudley and Stephens now face the noose. Lord Chief Justice Coleridge, in pronouncing sentence, declares: "The duty of a captain to his crew [imposes] on men the moral necessity, not of the preservation, but of the sacrifice of their lives for others, from which in no country, least of all, it is to be hoped, in England, will men ever shrink."  The power of the law re-affirmed, few objected when Home Secretary Sir William Harcourt commuted the sentences to six months imprisonment, not at hard labor.

The Standard wrote, Dudley and Stephens "are men deeply to be pitied, scarcely to be censured," while The Saturday Review reminded its readers: "The depositories of power must hold fast to principles without which the earth would indeed be full of darkness and cruel habitations."

Sketch from The Graphic
Posted by Tom Hughes at 9:08 AM