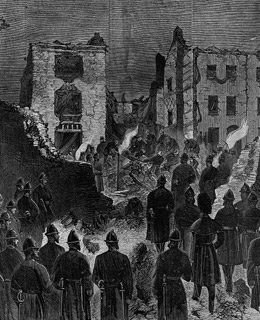 At 3:45 on a Friday afternoon, a tremendous explosion shakes London's Clerkenwell Jail. The blast topples some 200 feet of the jail wall while the concussion and flying debris levels dozens of adjoining tenements in the crowded Corporation Row. It is the first Irish terror attack to hit London. This modern "Gunpowder Plot" is the work of the Fenian band known as the Irish Republican Brotherhood, which hopes to free its jailed leader, Richard Burke.

The blast is timed for the daily exercize period when the inmates would have been out in the yard.  But an informer had tipped off the jailers and all the prisoners are locked in their cells.

Several residents recall seeing a man "dressed something like a gentleman" casually rolling a barrel to the base of the wall.  The man then struck a match to a fuse and dashed away only moments before the barrel, loaded with black powder, exploded. The wall was massive, 25' high by 3' thick, yet a gaping hole was blown clear through it.  The "collateral damage" in the neighborhood is horrible; more than 100 people are badly injured, many of them maimed. The death toll would eventually climb to 30. Many of the victims are children who play along the jail wall.

Condemnation of the bombing is universal; The Times calls it an "unexampled atrocity" planned by men "whose fierce passions. seared consciences make them regardless of human life." Several suspicious loiterers are quickly rounded up but the accused mastermind, Michael Barrett, the man who lit the squib, was run to ground in Glasgow. Returned to London, he was convicted, condemned and became the last man publicly hanged in England in May, 1868.

The Clerkenwell outrage brought the Irish "troubles" to the heart of London. The Illustrated London News hoped the callousness of the plot would shake those who held a "secret sympathy" with the Irish cause: "The instincts of common humanity will prove stronger than the aspirations of national feeling [and] what is due to the brotherhood of man will be held to impose more stringent obligations than what is claimed by any other brotherhood."

The Fenian attacks on London would continue, reaching their peak (in the Victorian period) with a series of bombings in the early 1880's.
Posted by Tom Hughes at 3:58 AM