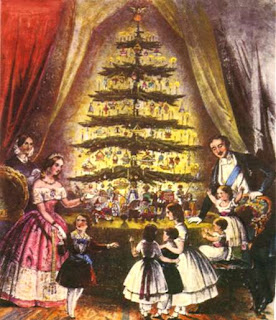 As usual, the Royal family gathers at Windsor Castle for the Christmas holiday. This year, readers of The Times are treated to an exclusive look at the Royal Yuletide from the Viscount Torrington, Lord-in Waiting.

Victoria and Albert's Christmas is a combination of English and German traditions; the latter include the Christmas tree, introduced to England - not by Albert, as he is oftimes mistakenly credited - but by Victoria's Hanoverian ancestors. There are no fewer than three trees in the Palace, hung in place of the chandeliers. Tables fairly groan with gifts for the Royal brood, nine children, ranging now in ages from 20 to 3. All the presents are opened on Christmas Eve.  In his "Windsor Special," Lord Torrington writes, "I have never seen a much more agreeable sight. It was royalty putting aside its state and becoming in words, acts, and deeds one of ourselves."

Christmas Day is sunny but quite cold. In fact, with a reading of 10 degrees in Hyde Park, it's said to be the coldest Christmas in fifty years. The day's highlight is a huge dinner. The Castle kitchens work round the clock to prepare the pies and meats, not only for the Royal table, but also for distribution among the tenants on the estate. More food will be given to the local poor on Boxing Day. A favorite dish each Christmas is the raised pie, featuring a woodcock stuffed inside a pheasant inside a chicken inside a turkey and then baked in stuffing and pastry. So many mincemeat pies are to be baked, the Castle cellars send up 24 bottles of brandy. For the Christmas meal, fifty turkeys are prepared.

"A really wonderful meal," a well-fed Lord Torrington told his readers, "How I live to tell the tale I don't know." His narrative concludes, "I never saw more real happiness than the scene of the mother and all her children: the Prince Consort lost all his stiffness... Altogether a jolly Christmas."

Sadly, no one could know it would be the last Christmas at Windsor. After Albert's death (see December 14) in 1861, the Queen could not bear the memories and preferred instead to observe the holidays at Osborne on the Isle of Wight.
Posted by Tom Hughes at 3:51 PM