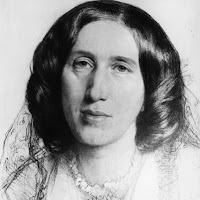 It is bitterly cold, windy and snowing as Mary Ann Cross is laid to rest in the Dissenter's section of Highgate Cemetery. She was known to her readers as "George Eliot."

Mary Ann (sometimes Marian) is buried alongside George Henry Lewes (see 20 July), discreetly described in the papers as "her friend and literary associate." Mary Ann had lived alone since Lewes' death in 1878.  She stunned her friends in May of 1880 by marrying John Cross, her investment advisor. He is 40, she was 60.

Their brief union was a disaster; Cross was so unhappy in Lewes' shade that, while on their honeymoon, he tried to drown himself in the Grand Canal in Venice. Once returned to London, the couple had settled in to an uneasy partnership, preparing to move into a new home on the Thames. Mary Ann fell ill and, despite her doctor's apparent unconcern, she rather suddenly died on 22 December. Cause of death: "a cold... resulting in a complete loss of power to the heart."

Even in death, "George Eliot" is controversial. Should she - as was her wish - be buried in Westminster Abbey? The Abbey's Dean Stanley was hesitant; he declared that he would need "strong representations" to permit the burial.  Many letters are written, pro and con. Surprisingly, one of the strongest negative letters came from the scientist T.H. Huxley: "George Eliot is known not only as a great writer, but as a person whose life and opinions were in notorious antagonism to Christian practice in regard to marriage—One cannot have one's cake and eat it too. Those who elect to be free in thought and deed must not hanker after the rewards which the world offers to those who put up with its fetters."  Space in the Abbey will not be made available.

Despite the weather, Highgate is crowded with literary and public notables, including Huxley. Although widely read and admired, so rarely was George Eliot before the public that The Illustrated London News cannot offer its traditional obituary portrait. The weekly's literary columnist concluded, "She was, after a manner, an abstraction, an impalbability." At the grave, John Cross delivers a brief eulogy, "Her spirit has joined that choir invisible whose music is the gladness of this world."

Cross was particularly disconsolate. The awkwardness of his position is summed up by those wags who are already calling him "George Eliot's widow." Cross was the author's first biographer, but he was so successful in obscuring the truth of Marian/Mary Ann/George Eliot's life, more than one of her friends found the subject of his book unrecognizable.
Posted by Tom Hughes at 7:28 AM