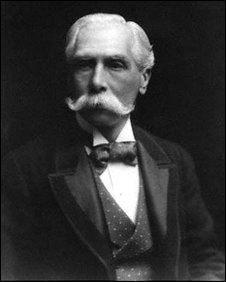 Prime Minister Salisbury informs "the minstrel of Toryism," Alfred Austin, that he will be named Poet Laureate by the Queen in the New Year's honors list.

Since Lord Tennyson's death in 1892, the post had been vacant. The reigning poets of the day, Oscar Wilde (who was in jail), Algernon Swinbourne (who was kept in seclusion), and Rudyard Kipling (whose barrack ballad, "The Widow at Windsor" had not gone over well with the Queen), were all unacceptable to the Crown.

Austin is a journalist by occupation who had written leaders for several Tory papers  He had acquired a deservedly modest audience for his poetry of the "garden" school.  When asked why he had selected Austin, Salisbury quipped, "He wanted it."

No Laureate in history has had his verse so savagely attacked. Within days of assuming the title, Austin composed an unfortunate ode on the Jameson Raid (see 3 January). A memorable quatrain:


So we forded and galloped forward
As hard as our beasts could pelt,
First eastward, then trending northward,
Right over the rolling veldt ...

Even Salisbury admitted embarrassment at the first effort of the new Laureate; he thought the poem played "unluckily to the taste of the galleries in the lower class of theatres who sing it with vehemence." The press gleefully bashed Austin, especially Punch, which dubbed him "Alfred the Little" and not only because the poet stood barely five feet tall.

Austin seemed oblivious; at one dinner party, when he remarked that poetry kept the wolf from his door, a fellow-diner asked waspishly, "Do you read the wolf your poetry?" When King Edward VII succeeded, he inquired whether he had the right to give Austin the sack.  He was told he could not but HRH took solace to learn the Laureate is an unpaid honor.

Modern critics have been equally unkind; Austin has been described as "a byword for pretentious emptiness." Upon his death in 1913, The Athenaeum observed cruelly, "The laureateship, virtually vacant since Tennyson's death, is now actually so."
Posted by Tom Hughes at 5:39 AM