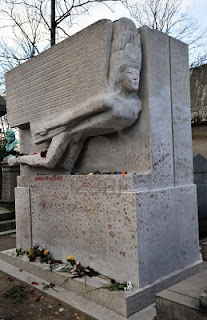 At two in the afternoon, Oscar Wilde dies in his rather dingy room at the Hotel d'Alsace in Paris. He was 46. A gruesome final hemorrhage brings to an end to several days filled with agonizing pain, eased somewhat by frequent doses of morphia.

Modern scholars believe the cause of death was cerebral meningitis, complicated by syphillis. Frank Harris claimed that the two years in an English prison had killed his friend. Still, disapproving of Oscar's "pet vice," Harris wrote: "If it is true that all those who draw the sword shall perish by the sword, it is no less certain that all those who live for the body shall perish by the body, and there is no death more degrading."

Almost to the end, Oscar remained true to character. He quipped that he was dying as he lived, beyond his means and bemoaning the wallpaper in his room, he cried, "It's killing me, one of us has to go." With death certain, a Catholic priest arrives to give the last rites. Oscar had asked that no priest be sent until "I'm no longer in a condition to shock one." As word of his death spread around Paris, dozens of the curious paid their respects, if only timidly as the French press noted the callers included "various English persons, using assumed names."

Lord Alfred Douglas, his beloved "Bosie," paid for Wilde's funeral and burial at Bagneux. In 1909, Wilde's body was moved to Pere Lachaise in Paris where he rests today beneath an inscription taken from his Ballad of Reading Gaol (1898). The story of his 18-month imprisonment, shunned by London's established imprints, was handled by the infamous Leonard Smithers, publisher and practitioner of the pornographic arts. It was an instant success, going into several printings; albeit in such small increments that a penniless Oscar complained that Smithers is so used to having his books suppressed, he's suppressing his own.


Yet all is well; he has but passed
To life's appointed bourne.
And alien tears will fill for him
Pity's long-broken urn,
For his mourners will be outcast men
And outcasts always mourn.