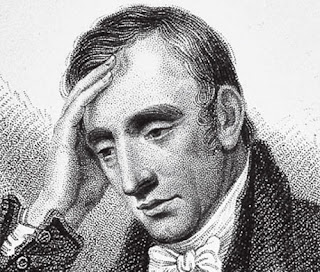 Writing to the Morning Post from his home at Rydal Mount near Ambleside, the Poet Laureate, William Wordsworth, expresses his dismay over the proposed Kendal and Windermere Railway intruding into his beloved Lake district.

Beyond the smoke and noise of the project, Wordsworth is concerned that the newly-passed "Cheap Trains Act" - requiring third class carriages on all trains - will flood Cumbria with hordes of city dwellers.  He argues that such "imperfectly educated" individuals will not be able to appreciate the beauty and tranquility of the Lake district.  He writes, "There is no benefit to be gained by transferring at once uneducated persons in large bodies to particular spots where the combination of natural objects are such as would afford the greatest pleasure to those who have been in the habit of observing and studying same."

Beyond letter-writing, the overwrought poet penned an ode entitled On the Projected Kendal and Windermere Railway.  The poem begins:

Is then no nook of English ground secure
from rash assault? Schemes of retirement sown
In youth, and 'mid the busy world kept pure
As when their earliest flowers of hope were blown,
Must perish; how can they this blight endure?

Speak, passing winds; ye torrents, with your strong And constant voice, protest against the wrong.

It wasn't particularly good poetry, nor was it successful. One critic derided Mr. Wordsworth for suggesting that the Lakes be set aside as a "game preserve" for poets. In April, 1845, the Board of Trade approved the railway, and without mentioning the poet, concluded: "An argument which goes to depriving the artisan of the offered means of occasionally changing his narrow abode ... for the fresh air and healthful holiday which sends him back to his work refreshed and envigorated . . appears to us to be an argument wholly untenable."

The railway was built. Wordsworth went out to inspect the works regularly; the "navvies," he noted with pleasure, "seem to feel the spirit of the place."

A sketch by Carruthers showing the poet, perhaps, fretting over the approaching Mancunian hordes.
Posted by Tom Hughes at 2:01 PM