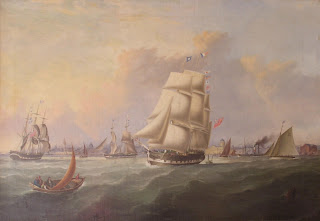 The chief mate and four seamen aboard the East India Company's Clydesdale are charged with killing the ship's cook.  The barque, had just docked at Liverpool, home from Bombay.

The victim was Philip Keal, a "colored" man, actually Jamaica-born. Only a few days out from port, Keal had taken to his berth, complaining of stomach cramps. The first mate, John Bowman Reynolds, went below and ordered Keal to make breakfast. Keal refused. According to the testimony of another colored sailor, Reynolds then said, "You skulking ------, I'll send down some tackle and bouse you up." Assisted by the others, Reynolds lowered a rope into Keal's cabin and with a noose around the sick man's neck hauled him up to the deck. There, wearing only a shirt, drawers and socks, Keal was left "in a stagnant state" exposed to November sea conditions in the north Atlantic. The ship's captain came upon the scene and ordered Keal taken below; but by then, the poor man was dead.

The case had caused "a considerable sensation" in the port city and a large crowd attends the inquest. The coroner concludes that "with little doubt, death is due to suffocation." There is widespread outrage at the conduct of the seamen; The Illustrated London News is sorry to report, "all of whom are white men, and, we regret, for the sake of our country and of humanity... natives of England."

The accused are brought to London and tried at the Old Bailey for "murder on the high seas."  On the opening day of the trial, however, the men are ordered freed. The indictment had specifically charged them with causing the cook's death by strangulation or suffocation. Yet, the coroner admits that Keal's death might have been caused by exposure or even by the poor man's constipation - the source of his pre-existing stomach pains - which, in the doctor's opinion - might have produced "congestion of the brain." Baron Alderson, presiding, said it was "regrettable" but he had no alternative but to dismiss the charges. He did lecture the men, saying that their conduct had been "extremely bad... for which they ought to be sorry for the rest of their lives."

The slipshod handling of the case is a scandal. The Times demanded action, noting that there are 10,000 ships flying the British flag around the world: "We are bound to see that each one of these, in her longest and
most distant separation from the shores of her mother country, shall ever feel the presence within her of English law."