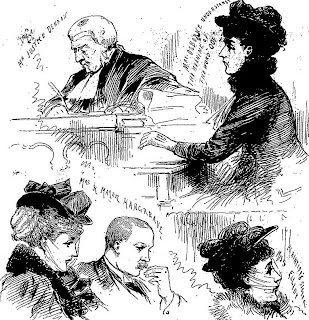 In a dramatic conclusion to a sensational trial, the great barrister Sir Charles Russell sobs as he informs the court that he must throw in his brief.  His client, now facing perjury charges, has fled Britain.

In February, Major and Mrs. Hargreaves had invited her young cousin, Ethel Elliot to come stay at their home in Torquay.  Ethel and her fiancee, Capt. Osborne, remained with the Hargreaves for several days.  Soon after the guests had left, Mrs. Hargreaves discovered some of her jewelry was missing, most notably a pair of earrings "with pearls as big as filberts." The jewels had been kept in a secret box in a location known to very few, including Miss Elliot.  Advertizing her loss, Mrs. Hargreaves heard from Spinks, the well-known jewelers of St. James, London. They reported that a young woman had sold them the jewelry for 550 gold sovereigns. The sale took place only a day after Miss Elliot had left Torquay.  The woman had given a name and address that proved false.

Spinks returned the jewels to Mrs. Hargreaves who began to openly talk of "this sad business with Ethel Elliott." She told friends, "Of course, she took the jewels." Miss Elliot, now Mrs. Osborne, sued for slander. Across Britain, all were asking "Did she do it?" Her defenders suspected spiteful old Mrs. Hargreaves of being jealous of the much younger and quite beautiful Ethel and her dashing military husband.  There was also another guest at Torquay who was known to have some rather heavy racetrack debts.

Ethel Elliot Osborne was on the stand for two days and her story was unshaken. The Spectator noted: "With her look of innocence, and her frankness in meeting cross-examination, she had carried the audience by storm." Then, the crash. A moneychanger reported a young woman had exchanged a bag of gold coins for 50-pound notes. At the Bank of England, investigators traced one such note that had been used to purchase linens in Mayfair. It bore a damning endorsement: Ethel Elliot.

The defendant having fled; the verdict was given to the Hargreaves who say they have no wish to prosecute the matter further.  However, Justice Denman agrees to issue a warrant (on Christmas Day no less) for Ethel's arrest for perjury.

She was returned to London for trial in March.  Pregnant and pleading hysteria, she was, nonetheless, given nine months hard labor. She served but one and was released due to poor health. The Great Pearl Mystery was finally over.  The Times spoke for many in wishing Mrs. Osborne "kindly oblivion"

The courtroom sketches in The Penny Illustrated Paper
Posted by Tom Hughes at 12:04 PM