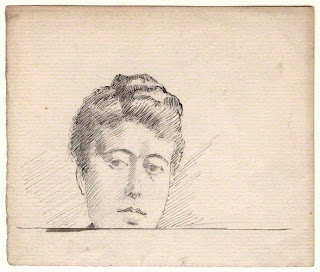 24-year old Mary Eleanor Wheeler is hanged at Newgate Prison.  Her final, words: "The sentence is just, but the evidence false."

Mary Eleanor Wheeler earned her living "receiving gentleman visitors" in her North London flat. She fell in love with one of them, a furniture removal man named Frank Hogg. Her lover was a married man and his wife was expecting.  Eleanor forgave him. Indeed, a quasi-bigamous relationship developed.  At the trial, a letter Eleanor wrote to Frank was introduced, "I love you with all my heart and I will love her because she will belong to you."  Eleanor nursed Phoebe Hogg back to health after the birth of Frank's daughter.

In October, Eleanor wrote Phoebe, inviting her to visit and bring "our darling child." Mother and daughter were never seen alive again. The baby was found dead from either suffocation or exposure along the Finchley Road. Phoebe was found, her head crushed and her neck cut through to the spine, dumped in woods in South Hampstead. In nearby St. John's Wood, police later found a blood-stained pram. When police found Phoebe's body, Eleanor was taken to the morgue to help identify the remains. There, Eleanor's bizarre behavior, her nervous laughter especially, prompted police to search her flat. They found signs of a "ferocious struggle" and a bloody poker.

Several witnesses testified that they saw Eleanor pushing a pram through the crowded streets of Kentish Town.  The pram seemed to be carrying an unusually heavy load. The man in the case, Frank Hogg, did not escape suspicion.  Had he conspired to do away with his inconvenient wife and child and return to his lover? But Hogg had a very good alibi and a lack of evidence saved him. Still, he was hissed at every appearance and needed a police escort to escape the London rnob. Eleanor's defense was very weak; her lawyers claimed there was only circumstantial evidence.  Why would Eleanor want to murder a women she'd obviously come to accept? The accused was a very slight woman and the defense argued that she would not have been strong enough to push a pram all that distance with two bodies inside.

The jury took less than an hour to find her guilty.  Justice Denman, denouncing her "prurient and indecent lust," donned the black cap and sentenced her to hang.  Appeals for commutation failed.  The Spectator decried any sympathy for this woman: "[There is] a distinct and most evil tendency to make of "love" an excuse for crime in the woman ... that nothing is too bad for the adulterer, and nothing too compassionate for the adultress."

The sketch of Mary Eleanor Wheeler from the National Portrait Gallery.
Posted by Tom Hughes at 3:50 PM