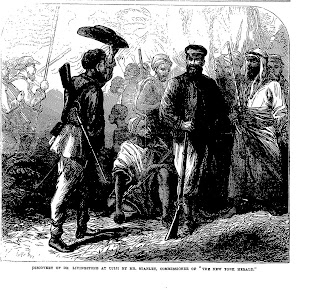 In the village of Ujiji, on Lake Tanganyika, Stanley finds Livingstone. The Scottish missionary-explorer has been missing five years and feared dead.

Henry Stanley, an illegitimate Welshman who had become one of America's first foreign correspondents, was sent into the jungle by his newspaper, The New York Herald; his mission - find Livingstone or bring back proof of his death. After more than six months of fevers and tribal warfare, Stanley had almost given up when natives told his bearers about an old man with a white beard in a village near the lake.

In his account of the legendary meeting, Stanley wrote how he struggled to control his emotions, so as to "not detract from the dignity of the white man." He recalled: “I walked deliberately up to him, took off my hat and said, 'Dr. Livingstone, I presume?' 'Yes,' he said with a kind smile, raising his cap slightly ... and then I said aloud, 'I thank God, Doctor, I have been permitted to see you.' He answered, 'I feel thankful that I am here to welcome you.'”

Stanley stayed with Livingstone for several months. Livingstone refused to return with him to England, explaining he could not leave until the Nile question was settled. Stanley arrived back in England in the summer of 1872 and was accorded almost heroic status. He met the Queen who was decidedly unimpressed, "a determined, ugly, little man - with a strong American twang." Stanley thought anti-American prejudice was responsible for the rather chilly reception he also received from the Royal Geographical Society, which had - after all - been embarrassed by the repeated failures of their own search parties. In fact, despite a letter in Livingstone's hand describing his meeting with Stanley, some dismissed the whole story as a hoax.

Modern chronologists believe Stanley may have been, understandably, confused and the actual date of the historic event cannot be given with any certainty.  We shall use the traditional date.