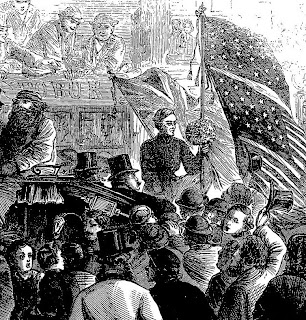 Color-Sergeant Gilbert Bates of the United States Army arrives in London, the destination of his 330 mile march from Gretna Green on the Scottish border.  For the entire journey, the Yankee soldier carried aloft the American flag.

It's all to prove a point and, not the least of it, to win a wager made with some fellow soldiers.  The bet was $1000 to his own $100 - that Bates could carry the American flag from northernmost England to the Imperial capitol itself without insult or incident. Bates reports receiving nothing but the most cordial reception along the way, leaving Gretna Green on the 6th of November and passing through Carlisle, Manchester, Birmingham, Oxford and on into London. After a rest in Shepherd's Bush, Sgt. Bates carries his flag to the Guildhall, traveling the final miles by carriage (sketch). In fact, in Bond Street, an enthusiastic crowd unharnessed the horses and pulled him the final two miles by hand. In return for his efforts, Sgt. Bates is presented with the Union Jack, which he promises to carry home to America.

The American press is remarkably unsupportive. The London correspondent for one newspaper referred to Bates as "an ass," whose effort to show British respect for the flag has only confirmed "a fact, the truth of which needed no proof, and which proved nothing if it was true." The New York Times wholly disapproved of the venture, condemning the "preposterous proceedings of this cheap military person (whose) unwarrantable liberties taken with a respectable and helpless flag, deserve the punishment of popular reprobation."

The good sergeant found a second career as a standard bearer in countless parades back in America.  He returned to London, appearing as "the renowned Sergeant Bates" in Buffalo Bill's Wild West Show in 1887.

The Penny Illustrated Paper
Posted by Tom Hughes at 9:39 AM