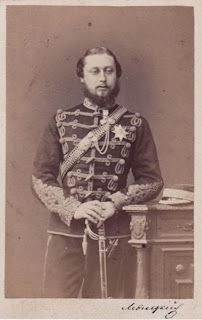 Prince Albert writes a heartbroken letter to Bertie, his son, the Prince of Wales. The father is distraught at having learned that his son is all but engaged to an Irish "actress," Nellie Clifden, whom he met and bedded while taking military training at the Curragh, near Dublin.

Making the news worse, Albert learned of the affair from his trusted eminence grise, Herr Stockmar, who reported from Coburg that the scandal had become the talk of Europe. It was "the gossip of all gossips." Lord Torrington confirmed for Albert that the whispers and snickers were being heard in London clubs as well. The word was that Bertie had even dared to bring Nellie back to London with him, and he'd dared to take her on a tour of Windsor Castle. Sparing the Queen "the disgusting details," an obviously anguished Albert writes to his son "with a heavy heart upon a subject which has caused me the greatest pain I have yet felt in this life." Amid worst case gossip that Nellie is with child, Albert imagines the worst, a lurid paternity suit:


There with (the Prince of Wales) in the witness box, she will able to give before a greedy Multitude disgusting details of your profligacy for the sake of convincing the Jury; yourself cross-examined by a railing indecent attorney and hooted and yelled at by a Lawless Mob!! Oh, horrible prospect, which this person has in her power, any day to realize! and to break your-poor parents' hearts.

So upset is the Prince Consort that, although unwell, he traveled through a cold rain to meet Bertie at Cambridge where son confessed to father and vowed the affair had ended. Returning to Windsor, from his sickbed, Albert wrote a second letter, "You must not, you dare not, be lost. The consequences for this country, and for the world, would be too dreadful!" In two weeks, Albert was dead (See 14 December).

The Queen, who knew enough of the details, told an old friend, that Albert had never recovered his strength after that "dreadful business at the Curragh."

The Prince of Wales in his military uniform
Posted by Tom Hughes at 7:07 AM