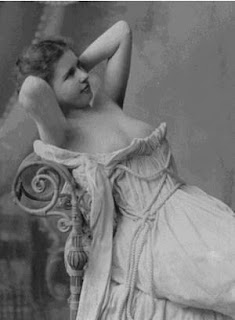 The infamous Mary Jeffries is jailed for six months for "keeping a disorderly house."

Mrs. Jeffries managed a network of brothels; perhaps the most popular of her establishments was on Church Street, in Chelsea, where four houses had been interconnected by hidden doors.  She catered to clients of all tastes and income; the Prince of Wales was whispered to be among her regulars and the King of the Belgians reportedly paid her a monthly retainer of £800.

For more than two decades, Mrs. Jeffries had been well known to the police but not much troubled in the operation of her enterprises.  In the mid 80's, however, the rapidly growing "purity" movement targeted Mrs. Jeffries and recruited Jeremiah Minahan, a former Inspector of Scotland Yard. While on the force, Minahan's zeal in this area received little encouragement from his superiors; in fact, he was warned off his "highly improper" investigation.

When arrested first for the first time in 1885, Mrs. Jeffries rode to court in a carriage loaned her by an unidentified Earl; she was ribaldly escorted by cheering Guardsmen. She accurately predicted, "Nothing can be done with me as my clients and patrons are of the highest social order." She plead guilty and had her token fine paid by admirers. The Sentinel, journal of the purity forces, denounced "the state of moral corruption" in London. Still, Mrs. Jeffries was forced to close a few of her brothels that had become so notorious that they no longer could offer the requisite privacy.

The purity police had not finished with her.  After taking some time off, she returned to her profession and The Society for the Suppression of the White Slave Traffic struck again. They recruited several witnesses, including the cook and coachman and neighbors who describe the activities at 15 Brompton Square. This time, Mrs. Jeffries must go to jail. Acknowledging her age (although her lawyers overstate it by 15 years) and poor health (a failing heart), the judge stipulates her six months be served without hard labor.

W.T. Stead - whose Pall Mall Gazette had focused attention on Mrs. Jeffries and her ilk (see 6 July) - nonetheless offered sympathy:  "We wonder what the Kings, Princes, Peers and officers who found the old lady so convenient for the gratification of their pleasures, think of her now. Probably, if the truth be told, they never spare a thought for their fallen flesh broker."

Photograph: Women & Crime in the Nineteenth Century
Posted by Tom Hughes at 3:17 AM