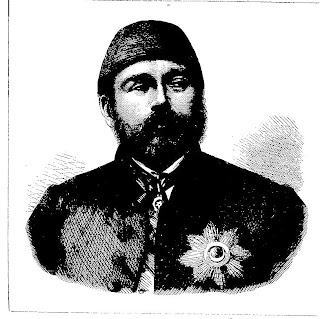 Acting on a tip from the City, with Parliament out of session, Prime Minister Disraeli must move quickly and discretely, for he hopes not to alert or alarm the rival French interests in Egypt. His Private Secretary, Montague "Monty" Corry, is quietly dispatched to New Court, the headquarters of the Rothschilds in the City. According to the legend, the negotiations are brief:


Baron Rothschild. "How much do you want?"
Corry. "4 million pounds."
The Baron. "When do you need it?"
Corry: "Tomorrow."
The Baron (pausing to meditatively chew a grape): "What is your security?"
Corry: "The British Government!"
The Baron. "You shall have it." (At the then hefty rate of 2.5% interest.)

A euphoric Disraeli presents the canal to the Queen. "It is just settled; you have it, Madam!" In truth, she doesn't have anything. The Khedive's shares are heavily mortgaged and carry no voting rights until 1895. Victoria, however, is no less delighted: "It is entirely the doing of Mr. Disraeli, who has very large ideas and very lofty views of the position this country should hold. His mind is so much greater, larger, and his appreciation of things great and small so much quicker than that of Mr. Gladstone."  The public reaction was more cautious; The Graphic conceded that the risks were worth taking  as "we cannot run any risk of the highway of the East falling into the hands of a rival Power."

It would be left to Disraeli's rival, Mr. Gladstone, to deal with the messy entanglements in Egypt created by the need to "hold the canal."  The Grand Old Man must have once again cursed his (by then deceased) rival whom he accused of "hoodwinking" the people of Britain.

Sketch from The Penny Illustrated Paper
Posted by Tom Hughes at 7:46 AM