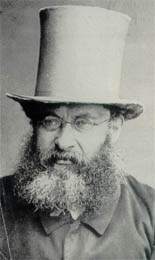 After what he described as "the most wretched fortnight of my manhood," the novelist Anthony Trollope fails in a bid for a seat in Parliament. Trollope's Palliser series is set in Westminster and he thought serving in the House of Commons should be the "highest object of ambition to every educated Englishman."

Alas, Trollope chose to stand as a Liberal for a traditional Tory seat in the notoriously venal town of Beverley, in Yorkshire. The Times quipped, "In 1854 there really was a pure election, but it was quite an accident." Trollope vowed to support Mr. Gladstone, the disestablishment of the Church of Ireland and state-funded schools, but he found that the electors of Beverley "cared nothing for my doctrines, and could not even be made to understand that I should have any." In a four man field, he finishes a distant fourth. The corrupt Tory incumbent Sir Henry Edwards is returned to Westminster.

Trollope received some measure of solace when he was called to testify at a subsequent Parliamentary inquiry which uncovered widespread fraud and bribery. So many of Sir Henry's votes had been bought (at an average price of 17s 6d) that Beverley was stripped of its seat. In his autobiography, Trollope wrote: "Beverley's privileges as a borough and my Parliamentary ambitions were brought to an end at the same time ... Nothing could be worse, more unpatriotic, more absolutely opposed to the system of representative government than the time honored practices of the borough of Beverley [where] political cleanliness was odious to the citizens."

Never to try again for Parliament, Trollope took fictional revenge on Beverley in his 1871 novel, Ralph the Heir, creating "that most iniquitous borough of Percycross." Trollope was hardly the only Victorian author to hanker for the House and be disappointed. Mr. Thackeray in Oxford, H. Rider Haggard in East Anglia, and Arthur Conan Doyle in Edinburgh, were also rejected by the voters.
Posted by Tom Hughes at 9:11 AM