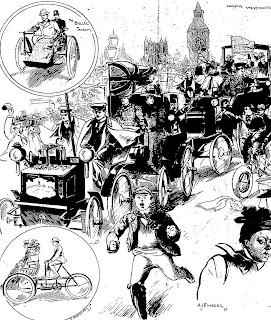 Celebrating the end to the 4MPH speed limit on the Queen's highways, several "motorists" assemble in London for a ceremonial procession to Brighton.

After a lengthy effort, the so-called "Red Flag" Act of 1865 had been finally repealed. In addition to the speed limit, the law had required operators of steam carriages to employ a man to run on foot ahead of the vehicle waving a red flag to warn of the oncoming contraption.

Today, despite heavy rains, a huge crowd gathers to watch "the first public trial of what is doubtless to become one of the most important branches of locomotion." 54 machines have entered ranging from German-made Daimlers to mere motorized bath-chairs. (The Times declared that these strange contrivances, "for the sake of brevity, may conveniently be styled 'cars.'")

The first vehicles wheezed off at 10:30 from Trafalgar Square.  Fully one-half of the vehicles never make it south of the Thames. It's slow going for everyone. Despite the new speed limit of 12MPH, it takes the leading vehicles a full hour to make it the three miles to the first checkpoint in Brixton. Gaining speed in the open country, the motorcars follow the route of the present day A23. A fork in the road in Reigate confuses more than a few drivers and many of them get lost.  This disarranges the plans for a grand entrance into Brighton and, instead, the surviving motorcars straggle in one at a time.

The "winner" - a German-made vehicle, the partisan Press must concede - arrives at the Royal Pavilion at 2:30 making good the boast that the 50 mile journey can be made in four hours. In Brighton, the motorcar promoter Harry Lawson proclaims, "Thank goodness this day has come at last, a day of the great deliverance of our roads and highways from the reign of quadrupeds."

The only blot on the day's events was word that an excited child had been struck by a vehicle in Crawley.  The injuries were fortunately slight.  Lawson says, in effect, these things are going to happen, "Is it not a serious thing to waste the time of 37 millions of people for fear some person may not look where he's going?"

Sketch from the Penny Illustrated Paper
Posted by Tom Hughes at 8:08 AM