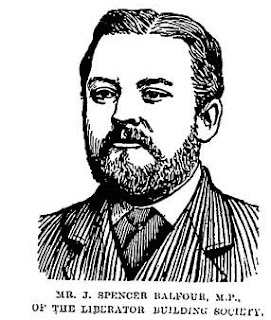 A London jury convicts Jabez Balfour, MP from Burnley, in one of the greatest financial scandals on the Victorian era.  The guilty man was reviled by The Times as "the most impudent and heartless swindler on record."

Balfour was a Croydon man who rose to financial and political eminence in the 1880's, managing a variety of enterprises, the most successful being The Liberator Building Society. With quasi-spiritual rhetoric, he promoted the bank as a great regenerator of the masses. He recruited prominent Non-Conformist ministers to serve on the board (as well as attract depositors from their flocks) and vowed that the LBS profits would go toward housing and improving the standard of living for Britain's downtrodden. To further such laudable aims, Balfour was soon elected MP, taking his seat in the Liberal ranks. By 1888, the LBS had amassed assets of £750,000. While some small-scale "good works" were funded by the LBS, Balfour used most of the money - other than to maintain his own comfortable lifestyle - to engage in speculative investments, abounding in the booming early 90's.

The crash came in 1892. When rumors swept the City of money problems at the LBS, depositors clamored for their savings. In October, the LBS shut its doors. At least 25,000 people were ruined, many of them decent God-fearing folk who'd put in their life savings at their cleric's behest. Balfour levanted to Buenos Aires, along with his wife - still spending money skimmed from the LBS.  Scotland Yard finally tracked him down and he was extradited to England, returning to London amid general execration.  Balfour - helped by expensive legal counsel -- delayed his legal reckoning for over two years. But when it came, it was severe. He gets fourteen years in jail; the judge expressing the hope that "No prison doors can shut out from your ears the cry of the widow and the orphan whom you have ruined."

The wrath of The Economist was typical:  "To the worldly-wise, the mixing up of religion and business, and the public appeals for Divine guidance in company matters, are regarded, and rightly regarded, as marks of the Pharisee, and as danger-signals which it would be unwise to ignore. Balfour's conduct would have been bad enough under any circumstances, but the hypocrisy which permeated it from beginning to end made it infinitely more contemptible than if he had been an ordinary financial scoundrel."

Balfour lived out his remaining years comfortably - aided by profits from his best-seller, My Prison Life.

The sketch from The Penny Illustrated Paper.
Posted by Tom Hughes at 9:21 AM