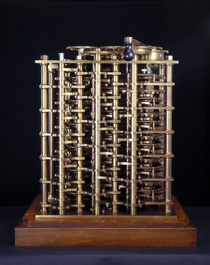 Mathematician-inventor Charles Babbage storms out of 10 Downing Street.  This unsuccessful confrontation with Prime Minister Peel may be said to have pushed the development of the computer into the 20th Century.

In 1823, Babbage first received government assistance for his work on a massive calculating contraption he called his "Difference Engine." In 1834, he announced that he had developed a new analytical device which, while superseding what he had been working on, could be easily incorporated in "Difference Engine No. 2." Whitehall sceptics, with nothing to show for all the monies expended thus far, ordered an end to all funding for the project.

The impasse lasted eight years until Babbage demanded a yes-or-no from Mr. Peel's government. While bowing to the "ingenuity and labor" expended on the project, the answer is no. “The expense which would be necessary to render it either satisfactory to yourself, or generally useful, appears on the lowest calculation far to exceed what we should be justified in incurring.” Grudgingly granted an audience with Peel, Babbage arrives with charts and ledger books, none of which the PM cares to consider. Babbage blames the delay in achieving results on the "harassing state of uncertainty" in funding and pleads, "I thought that the services I had rendered ought not to be utterly unrequited and unrewarded." In his notes, Babbage recalls, “Sir R. Peel seemed excessively angry and annoyed during the whole interview...Finding [him] unwilling to admit that I had any claim, I merely remarked that I considered myself as having been treated with great injustice, but that as he seemed to be of a different opinion, I could not help myself, on which I got up and wished him good morning.”

Peel had offered a compensatory knighthood. It was rejected. Babbage continued to work on his "engine" using personal funds and small gifts from supporters.  Yet, he produced no results.

He became a figure easily mocked: e.g. Disraeli who suggested the machine be used to calculate the "millions squandered" on it. Babbage left his papers to Cambridge; when mechanical technology caught up with his theories, he earned the title "Father of the Computer."

The Difference Engine at sciencemuseum.org.uk
Posted by Tom Hughes at 7:50 AM