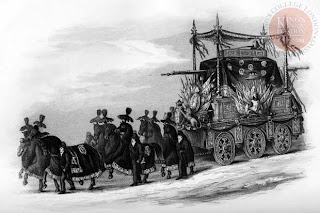 The "Iron Duke" is laid to rest in the crypt at St. Paul's.

The Duke of Wellington had died more than two months earlier, on 14 September, at Walmer Castle in Kent. He had awakened in his old Army cot with a complaint of "some derangement" in his chest and, after requesting his morning tea, lapsed into a coma and died that afternoon at 83. The Queen ordered services for the "Dear Old Duke" delayed until Parliament's return.

More than a million people, hats in hand, line the procession route from Westminster Hall - where the body had lain in state - to the Cathedral. The cortege passes Buckingham Palace to afford the Queen a glimpse. She weeps at the sight of the old Duke's riderless horse, with boots reversed in the stirrups. She was not permitted to attend a subject's funeral, not even for (in her words) "the greatest man this country has produced." Prince Albert reported to her that the services were "most affecting."

Albert had played a lead role in the design of the huge funeral wagon which, bearing the coffin, is pulled by a team of magnificently costumed dray horses. Few would forget the sight. Carlyle wrote: "Of all the objects I ever saw the abominably ugliest." Dickens added: "For form of ugliness, horrible combination of color, hideous motion, and general failure, there was never such a work achieved as the Car." 27-feet long and weighing some 18 tons, the wagon lurches to a halt in Pall Mall when the roadbed gives way. 30 soldiers must drag it free.

At St. Paul's, an icy November wind howls down the main aisle of the great Cathedral as the massive doors swing open to receive the body. Tennyson, the new Poet Laureate, prepares an Ode for the occasion


Lead out the pageant:  sad and slow,
As fits an universal woe,
Let the long procession go,
and let the sorrowing crowd about it grow,
and let the martial music blow;
the last great Englishman is low.