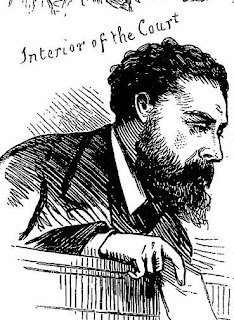 At the Old Bailey, Henry Wainwright answers "Not Guilty" to charges he murdered, then dismembered, his mistress, Harriet Lane.  The apparent respectability of the accused adds a special horror to the gruesome crime.

Henry Wainwright had lead a double life. A respected businessman, he owned a brush-making firm. He lived in Tredegar Square with his wife and four children and was active in his church.  Unbeknownst to all, he also kept a second establishment in the East End where he was known as Percy King and Harriet was "Mrs. King."  Wainwright managed to juggle all this duplicity until his business affairs soured.

To save expenses, Wainwright decided to move his mistress into smaller quarters at a squalid address. She was understandably displeased about the new arrangements and threatened to go to his wife. Wainwright lured her to his Whitechapel warehouse for a meeting.  There, he shot her twice in the head. He then "inexpertly" chopped her body into ten pieces and buried it in lime beneath the floor. One year later to the very day, having now been evicted from the warehouse and fearing discovery of the ghastly grave, he dug up and boxed Harriet's remains.

He got one of his workmen to help him load the parcels onto a wagon. He made a poor choice. Stokes - who later claimed a "supernatural" voice urged him to "Open that parcel!" - looked inside one crate and discovered a decomposed human hand. Following the wagon on foot, Stokes alerted a constable and the two of them tailed Wainwright and his boxes to a pub in the Borough where he was arrested.

The trial will last eight days; Wainwright remaining self-possessed, even "jaunty," throughout although his feeble defense - a far-fetched claim that Harriet had committed suicide - failed to impress the jury. Found guilty, he spent his final days saying farewell to family and friends. The Spectator found him to be: "A curious mixture of complete callousness and capacity for affection."

Having made a full confession, Wainwright was hanged on 21 December.  An eyewitness wrote: "His handsome features were lighted up with an expression of resignation unmixed with anything approaching bravado."

Sketch of Wainwright from The Penny Illustrated Paper
Posted by Tom Hughes at 7:30 AM