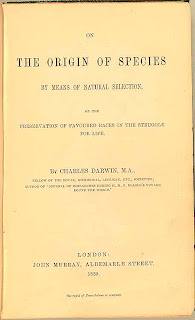 Charles Darwin's On the Origin of Species by means of Natural Selection, or the Preservation of Favored Races in the Struggle for Life is published by John Murray in London. Bookdealers sensing controversy and, of course, sales, buy up all 1200 copies the first day at a cost of 15 shillings apiece.

"God knows what the public will think," wrote Darwin to a friend. The author - who suffered from a variety of health problems - has retreated to the spa town of Ilkley in Yorkshire: "I am here hydropathizing and coming to life again, after having finished my accursed book."  The work is based on research as much as two decades old that Darwin had heretofore hesistated to publish. But when rivals began to come forward - most notably Alfred Russell Wallace - Darwin had to go to print.

In brief, he argues that life is governed by three factors: (1) living things tend to vary from their parent, (2) the variations tend to be very minor, and (3) by the process of natural selection, those variations fittest for survival live on, those unfit die off.  In a famous passage, he concludes, "There is grandeur in this view of life ... from so simple a beginning, endless forms most beautiful and most wonderful have been and are being evolved."  Herbert Spencer later coined the phrase "survival of the fittest" which Darwin admitted "is more accurate, and is sometimes equally convenient."

The reviews are mixed. In The Times, the scientist Thomas H. Huxley is favorable; in The Spectator, Darwin's old professor at Cambridge, the Rev. Adam Sedgwick is not: "You cannot make a rope out of a string of air bubbles." The most virulent attacks are from the clergy. Bishop Samuel Wilberforce, in The Quarterly Review, rejects the "ape" theory, or as he put it, the "degrading notion of the brute origin of him who was created in the image of God."

Darwin, other than making respectful references to "that heroic little monkey," left to others the public debate, confident that though "all the world might rail, ultimately the theory of Natural Selection would prevail."  By early December, the publishers announced a second printing and it has not gone out of print to this day.
Posted by Tom Hughes at 5:33 AM