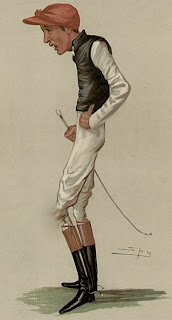 Not only the sporting world, but all Britain is shocked by the suicide, at only 31, of the legendary jockey, Fred Archer.

An inn-keeper's son, Archer - nicknamed "The Tinman" - had ridden 2746 winners, including five Derby champions.  The “greatest jockey that ever sat in a saddle,” he earned as much as £8000 per year. Trusted by his employers, who included the Duke of Westminster and the Prince of Wales, Archer was envied – if not despised – by his rival riders.  But he was "simply worshipped" by the railbirds who loved his fearless style: “He never hesitated to take the inside of the turn while more mature jockeys, afraid of their necks, were taking wide bends round the corner and losing lengths and often the race by the manouvre.”

When his young wife died two years before, the nation grieved with him. Now, at Archer’s end, The Times wrote: "Hardly anything that could befall an individual would cause a more widespread and painful sensation throughout England." The jockey had been unwell. Like all riders, he fought to keep his weight down, employing a regimen of Turkish baths coupled with primitive diets known, appropriately, as "wasting." In late October, he stopped eating for several days to make his weight (119 lbs) for the Cambridgeshire Cup, the only major race he hadn't won. But 1886 was not to be his year; aboard St. Mirin, he fell short again. Racing next in Brighton, subsisting on champagne and the odd biscuit, Archer collapsed at the end of a cold, wet day.

The rider was taken home to Newmarket to be cared for by his sister. The anxious public was reassured that his condition seemed to be improving. On a Monday afternoon, he asks his sister to open the sickroom curtains so he might see the heath. Moments later, a shot. He'd pulled a pistol from beneath the coverlet and blew his brains out. It is the anniversary of his wife's death.

Many newspapers questioned the fitness of a mere jockey for such hero's status; but, as The Times put it, Archer's death was "an almost personal loss literally to millions." Added The Saturday Review: "A country may as well admire a popular jockey as a popular preacher of a common modern sort."

Archer in Vanity Fair
Posted by Tom Hughes at 4:57 AM