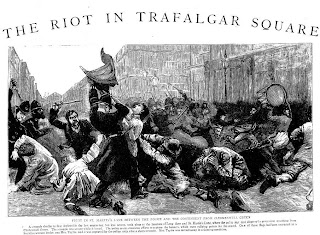 London police, backed up by the Life Guards, successfully prevent a major demonstration in Trafalgar Square. Amid continuing unemployment and social unrest, Sir Charles Warren, the Commissioner of Police had closed the Square - which, in theory at least, belonged to the Crown. This, of course, quickly prompted a coalition of jobless, socialists, anarchists, Irish nationalists, and other radicals to set a date for the largest assembly yet.

The police and soldiers are out early to secure the main access routes. The young socialist Bernard Shaw sets out from Clerkenwell Green with a large group, most of whom "skeedaddled" when met by police in Holborn. Some of them run all the way to Hampstead Heath in what Shaw called "the most abjectly disgraceful defeat ever suffered by a band of heroes outnumbering their foes a thousand to one."

Fewer than a hundred make it to Nelson's Column. Before a small audience, a magistrate reads the Riot Act. The conservative Saturday Review offered "hearty and ungrudging praise to the guardians of liberty and order." The Times said the marchers were primarily "worthless, vicious" denizens of London's slums, lead by persons with "a diseased craving for notoriety."

One of those who does make it to the square is R.B. Cunninghame-Graham, a Scottish MP, who chains himself to a railing, waving a red flag. He later wrote in the Socialist journal Commonweal: “I saw repeated charges made on a perfectly unarmed and helpless crowd: I saw policemen not of their own accord, but on the orders of their superiors, repeatedly strike women and children; I saw them invariably choose those for assault who seemed least likely to retaliate.” The police were much criticized and, as a result, most of the rally organizers were let off with only minor punishment.   A future Prime Minister, Mr. Asquith, who defended several of the marchers, declared, "No doubt the police lost their heads and acted in a most brutal and unjustifiable manner."

Shaw thought the "violent farce" proved the folly of directly challenging the authorities, "They will provoke; we will defy; they will punish. I do not see the wisdom of that."

Sketch from The Graphic
Posted by Tom Hughes at 8:00 AM