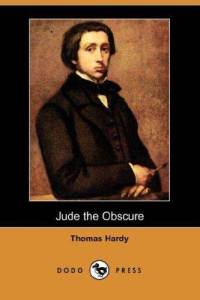 Under the headline "Jude the Obscene," The Pall Mall Gazette joins the rush to condemn Jude the Obscure, the newest novel by Thomas Hardy. The Gazette dismisses Hardy's despairing tale with a mock plot summary: “To the best of our reckoning, a total of six marriages and two obscenities to the count of two couples and a half - a record performance, we should think. And they all lived unhappily ever after, except Jude, who spat blood and died.”

Elsewhere, the official paper of the Church of England, The Guardian, called it "a shameful nightmare." The Bishop of Wakefield boasted from his pulpit that he had burned the book. The London World headed its review, "Hardy the Degenerate," and the respected Athenaeum called it "a titanically bad book." Even a generally favorable critic, Edmund Gosse, writing in The St. James Gazette, called it a "gloomy, even a grimy story." Many of the offending passages in the novel, including a reference to a pig's pizzle (penis), had to be be cut out of the serialized version which appeared in Harper’s Magazine. The editor refused to print anything which "could not be read aloud in a family circle." W.H. Smith announced that the book would not be sold in its nationwide chain of railway bookstalls.

Making matters worse for the author, his wife abhorred the book. Although the story that Mrs. Hardy tried to have it suppressed is now widely doubted, she did tell a friend it was the first novel that her husband had not let her read and had she read it, she vowed, it would not have been published.

This is not Hardy's first brush with a censorious press and public. A few years before, stung by the harsh reception to Tess of the D'Urbervilles, he had written, “If this sort of thing continues, no more novel-writing for me. A man must be a fool to deliberately stand up to be shot at.” With the venomous response to Jude, Hardy had had enough. In his revised preface to the novel in 1912, he wrote "the experience completely curing me of further interest in novel-writing."
Posted by Tom Hughes at 7:55 AM