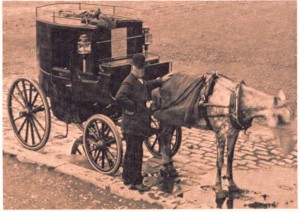 London is shaken by the discovery of a mother and her two daughters found dead in a hansom.

The cabman tells police he picked up a well-dressed man, with full moustache, along with the three victims, in Shoreditch.  He was given an address in distant Westbourne Grove. At one point, whilst in the City, the man asks the driver to stop at a pub and bring him a pint of ale. The cab then rolls on until High Holborn where the gentleman cries out, "Hold hard, Cabbie! I'll get out here." The gentleman tipped handsomely and orders the cabman to drive on.

Through the teeming streets on a Saturday night, the cab finally reaches the Royal Oak, Westbourne Grove, where the horrifying discovery is made. The victims - unidentified save for some faded laundry marks - had been poisoned, the ale had apparently been laced with prussic acid.

The sensation is immediate; The Times shudders: "The very crowd, noise, bustle and lights of the streets, and the indifference of the thousands... may veil a hideous crime more effectually than the darkness of the forests or caves with which romance usually shrouds such deeds." A reward of £100 was posted.  Londoners talked and read of little else.

The vast anonymity of the city proved no protection for the killer. A suspicious postman in Camberwell told police of a man named Hunt who had two daughters by an unhappy marriage and who had talked of "doing" his wife. Detectives called on this Samuel Hunt who insisted he'd been in Margate all weekend. He told police that a suspicious mustachioed man had been seen calling upon his wife. When told that he would have to come along to perhaps identify the bodies, Hunt slipped away long enough to take a lethal draught of aconite poison. In his final retches, he confessed: "She was always very jealous, and, Oh! she led me a dreadful life."

A salesman for a firm of “seedsmen, herbalists and druggists” in Covent Garden, Hunt had slowly amassed the poisons he needed. At the inquest, a barber in the Strand swore that he had sold a false moustache to the clean-shaven Hunt. Although Hunt had a well-constructed alibi, The Spectator expressed relief that most men are "not equal to the effort" of concealing such "pitiless crimes."
Posted by Tom Hughes at 4:43 AM