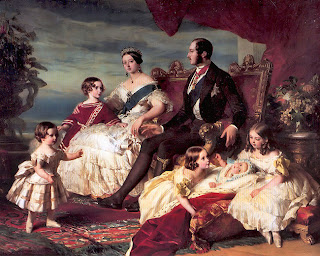 Queen Victoria, after "very severe" sufferings and numerous false alarms, gives birth to a "fine large Boy" at 10:48 in the morning. The boy is the Queen's second child, but her first son, and thus becomes the presumptive heir to the throne. This was quite a big deal as not since the reign of George III, eighty years before, had a reigning monarch announced the birth of a legitimate son.

The infant is taken soon after his birth for the traditional presentation (inspection?)to the Government ministers who had been assembled in an adjoining room, including Prime Minister Peel, the Duke of Wellington and the Archbishop of Canterbury. The latter, the victim of some of those false alarms, arrives late for the ceremony.

The boy, notes the Queen in her diary, has "very large dark blue eyes" and "a finely formed but somewhat large nose." She writes her uncle Leopold, King of the Belgians, "You will understand how fervent my prayers ... to see him resemble his angelic dearest Father in every, every respect." The baby arrives on the Lord Mayor's Day, an additional reason to celebrate. The Times calls the countrywide reaction, "one universal feeling of joy."

Perhaps the only person to resent the arrival was the 2-year old Princess Royal. Punch quipped that the little girl had developed an alarming "affection of the nose, which is said to be quite out of joint since the royal stranger came into existence." Created Prince of Wales in December, the infant wasn't christened until late January at Windsor, amid full pomp costing £5000. No one could doubt that the boy would be christened Albert, for his father, although the ex-Prime Minister Lord Melbourne urged the "more English appellation, Edward." It would be 59 years before Albert Edward, called "Bertie" from infancy, would become King Edward VII.

One additional note: there was much favorable comment at word that a Mrs. Brough, a former housemaid, would be wet-nurse for the Prince. It was said to be a good thing that the young Prince would owe his nourishment to the very humblest of his people. In 1854, Mrs. Brough went mad and murdered her six children.

Winterhalter's family painting; "Bertie" is given pride of place with Mama.
Posted by Tom Hughes at 5:03 AM