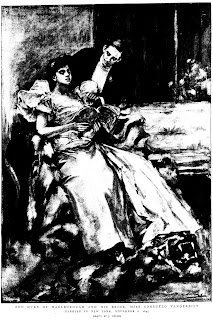 Crowds line Fifth Avenue in New York City hoping to catch a glimpse of the 9th Duke of Marlborough and his 18-year old American bride, Consuelo Vanderbilt. While hardly the first, the wedding is the most heralded linkage between the English peerage and American wealth. It may also have proven to be among the most disastrous.

The 25-year old Duke bears one of the proudest names in the realm, though tarnished somewhat by the profligacy of his father, the recently deceased and unlamented 8th Duke.  Consuelo is the granddaughter of the great Commodore Vanderbilt, the American railroad baron. The New York Times reports the wedding, with a price tag rumored at $400,000 (£80,000), was "the most magnificent ever celebrated in this country." Beneath the pomp, however, is the undeniable fact that the marriage is more a financial transaction than a love match; a title in exchange for desperately needed funds to satisfy the creditors circling the historic seat of the Marlborough’s, Blenheim Palace. Alva Vanderbilt admitted, "I forced my daughter to marry the Duke." "Sunny" - an inappropriate nickname for a melancholy young man - didn't come cheaply; the Vanderbilts ponied up $2,500,000 in railway stock, plus $100,000 a year apiece for Duke and Duchess.

The marriage was a spectacular failure. Even their wedding, delayed a day so as not to fall on Guy Fawkes Day, gave rise to disagreement. In her best-selling autobiography, The Glitter and the Gold, Consuelo later grumbled, "This was only the first of a series of, to me, archaic prejudices inspired by a point of view opposed to my own." She recalled spending the hours before her wedding in tears. Of the service, she wrote: “The usual hymns glorifying perfect love were sung, and when I glanced at my husband shyly I saw that his eyes were fixed in space.”

After a grand honeymoon across Europe, the Duke and his new Duchess returned to Blenheim, where, at the estate gates, their carriage horses were unhitched and, as Consuelo recalled, "our employees proceeded to drag us up to the house." Separated in 1906, they divorced in 1921.
Posted by Tom Hughes at 4:35 AM