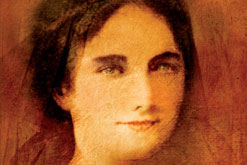 The proceedings commence in O'Shea v Parnell, indisputably the most significant divorce case of the Victorian period.

Capt. William O'Shea - a former MP for Galway - had named as correspondent his erstwhile Parliamentary leader Charles Stuart Parnell. The latter's relationship with "Kitty" O'Shea (left) had been a longstanding one which, if discreetly conducted, was no secret in political circles. O'Shea, himself, appeared to accept the fact in exchange for Parnell's assistance in fostering his, alas singularly ineffectual, political career. In his testimony, O'Shea denies any connivance in his wife's infidelity. Parnell and Mrs. O'Shea opt to stay away from the court and make no defense.  Those in attendance are rewarded with "the squalid details" of adultery. For all intents, Parnell lived with Mrs. O'Shea at her seaside retreat it Brighton. Yet, when Capt O'Shea would arrive, Parnell - according to the servants - clambered down a rope out a back window to shortly reappear at the front door as a casual guest.

The jury quickly found for Capt. O'Shea and the presiding judge denounced Parnell as "one who takes advantage of the hospitality of the husband to debauch the wife."  The verdict proved the ruination of Parnell politically. The Times, pathologically anti-Parnell, regarded the verdict as "incapacitating a man from asserting the moral ascendancy that ought to be possessed by a political leader." However, citing Fox, Palmerston, Wellington and "others too numerous to mention," The Bristol Mercury thought the public reaction was "arrant hypocrisy."

Prime Minister Gladstone, with whom Parnell had warily co-operated on efforts to win Home Rule for Ireland, called for the Irishman's resignation, declaring that the scandal had produced "the gravest mischief to the cause." Challenged as Irish leader for the first time in more than a decade, Parnell fought to remain "Master of the Party." Blows were only narrowly averted when a dissident cried out, "And who is to be the Mistress?"

In June, 1891, Parnell quietly married Katherine at a Registry Office, issuing a statement. "I can truly say that I am now enjoying greater happiness than I have ever experienced in the whole of my previous life." It would be short-lived. Broken in reputation and in health, Parnell died that October at the age of 45.
Posted by Tom Hughes at 6:59 AM