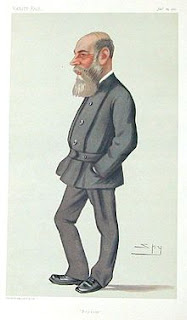 Their work done and accompanied by their ubiquitous escort of 1000 armed militiamen, a contingent of volunteers -Ulstermen all - marches out of Ireland's remote County Mayo having saved the harvest of the embattled Captain Charles Boycott, the land agent for Lord Erne. The trouble began in September when the Captain - until then, a fairly popular man in the area - evicted several tenants for non-payment of rent. Soon, no one would work the fields at Lough Mask House.

Boycott has become the first victim of the Irish M.P. Parnell's "Plan of Campaign." To pressure London to reform Ireland's land laws, he called for a rent strike. If any tenant be evicted, let no man take his place. For Parnell, this was his alternative to the fruitless and counter-productive violence against landlords and agents. Parnell spoke in Ennis: "When a man takes a farm from which another has been evicted, you must show him in the streets of the town ... even in the house of worship, by leaving him severely alone, by putting him into moral Coventry, by isolating him from his kind as if he were a leper of old ... your detestation of the crime he has committed."

It cost the government £10,000 to save his Lordship's "praties."  England is alive with indignation; The Times declares, "When it becomes necessary to send troops to prevent laborers engaged in commonplace farm-work from being attacked, we have certainly got into the region of the abnormal." The Irish Secretary, Mr. Forster, declared "Unless we can strike down the boycotting weapon Parnell will beat us." The Illustrated London News notes the new word: "To 'Boycott' has already become a verb active, signifying to 'ratten', to intimidate, to 'send to Coventry' and to 'taboo.'"

The eponymous Captain Boycott soon sought the safety of England. Parnell and his lieutainants were tried in Dublin but, predictably, acquitted. Evictions all but halted; over 1900 tenants had been removed in the first nine months of the year, but after "the boycott", less than 200 were forced out in the rest of 1880.

Capt. Boycott by Spy in Vanity Fair.
Posted by Tom Hughes at 10:17 AM