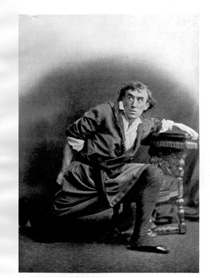 At London's struggling Lyceum Theatre, there any many empty seats on this opening night for a little known melodrama starring a fairly unknown actor from the provinces. Soon, however, all London's theatre world would be talking about The Bells and its star, the 33-year-old Henry Irving.

The actor plays Matthias, a wealthy innkeeper who is haunted by his conscience for the murder and robbery of a rich Jewish traveler, who had sought shelter at his inn during a severe storm many years before. On the eve now of his daughter's wedding, amidst the recurring sound of sleigh bells, Matthias dreams of his exposure, conviction and hanging. He awakens and dies in a fit.

While the audience at the Lyceum is described as "neither numerous nor distinguished," the critics are uniform in their praise: The Athenaeum hailed Irving for "histrionic power of the rarest kind," the owner of The Daily Telegraph was among the first-nighters and tells his reviewer, "Tonight I have seen a great actor ... Write about him so that everyone shall know."

Irving and the play are a sensation, "Have you seen The Bells?" is on everyone's lips. For Irving, it is a night of professional triumph, after more than a decade as the proverbial struggling actor.  But the evening bears its cost. Leaving an opening night party, at which he celebrated perhaps too much, Irving and his wife, Florence, the daughter of an Irish surgeon, enter a cab for the ride to their West Brompton home. On the way, Irving - quoting the actor Kean following a similar triumph - exults: "Maybe now we can afford our own carriage." To which Florence replies: "Are you going to go on making a fool of yourself like this all of your life?" Ordering the cabman to stop at Hyde Park Corner, Irving got out and never saw nor spoke to his wife again.  They had been married two years with two sons.  They never divorced.

Irving continued to support his wife while enjoying a thriving on and off stage partnership with Ellen Terry, the leading lady of the late-Victorian stage. Frank Harris thought Irving was "more than an actor" and ranked him ahead of Parnell and Gladstone among the great personages of the period. Only one man could match him, wrote Harris, "Irving, like Disraeli, took the eye with him and excited the imagination."

In 1895, Irving became the first actor to earn a knighthood.

Irving as Matthias in The Bells, from gaslight.mtroyal.ca/mathias.html
Posted by Tom Hughes at 5:46 AM