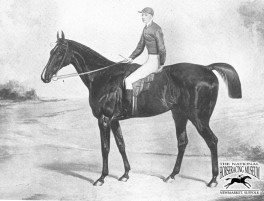 The legendary "Squire Abingdon" is laid to rest in the land of his birth, the Scottish borders.  Born George Baird, the only surviving son of a coal millionaire, they said the Squire was the richest commoner in the realm with an annual income of £250,000. Poor in school and shunning business, he gravitated to the Turf, opening his own stables as "the Squire." He became a colorful fixture in London's demi-monde. A friend recalled his "engaging habit" of spitting drinks on strangers in West End bars.  He was a financial "angel" to several actresses and dancers, among them Lily Langtry.  Their's was a stormy relationship, at one point the gossips reported that he beat her up, leaving Lily with a shiner. The rueful Squire apologised with a gift of £25,000.

Not a man to tarry with any woman, he move on to a dalliance with "Doll Tester," another ex-actress who had won the hand of the caddish Marquis of Ailesbury. He sent "Doll" home to her Marquis with £100,000 in reparations. When Baird wrote a check for £100,000 to the Kirk of Scotland, wits dubbed it the "largest fire insurance policy" in memory.

In addition to the turf, the Squire had recently taken an interest in prize-fighting. Backing an Australian boxer named Jim Hall on an American tour, Abingdon worked in Hall's corner in a losing bout with the American, Fitzsimmons. The New Orleans fight venue was a drafty old barn, and on a chilly March evening, he was ill-dressed for the elements. Undismayed by his man's defeat, the Squire joined in a "general round of dissipation" which followed, but, within hours, he collapsed. His death on 8 March was attributed to pneumonia, but The New York Times acknowleged: "His appearance of late has shown the effects of a very fast life."

Accountants closing the estate estimated that, in his short life, the Squire expended something near £2,000,000.  Racing World concluded that "he probably got less enjoyment out of money expended than any turf celebrity on record."  He left his mother a million pounds.

[Horseracinghistory.co.uk]
Posted by Tom Hughes at 6:21 AM