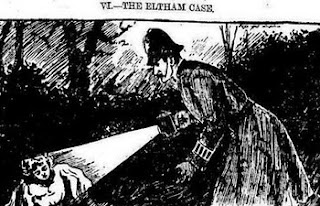 At five a.m., a passing constable comes upon an injured woman in the woods near Blackheath. "Oh, my poor head, just let me die," she cries before lapsing into a coma. The woman's head had been "battered in a fearful manner." Police find a bloody hammer nearby. The victim died never regaining consciousness. Police made a quick arrest but "the Eltham murder" would not be so easily solved.

The victim is Jane Clousen, a servant girl most recently in the employ of the Pook family, Mr. Pook being a prosperous printer in the City. At her death, she was two months pregnant. Jane had told a friend the father of her baby was 20-year old Edward Pook and their intimacy had led to her dismissal. Police quickly took Pook fils into custody. They found an ironmonger who claimed he'd sold Edward a hammer - identical to the murder weapon. Witnesses reported seeing Edward and Jane together the night of her death. A bloody shirt was taken from his room.

Despite the confidence of the police, Edward had a strong case. He claimed he'd been in Lewisham at the time of the murder. Further, the man who bought the hammer wore light colored trousers, Edward owned only dark. Subject to fits, Edward often bit his tongue, explaining the bloody shirt. Several of the Crown witnesses proved unreliable.  The defense claimed they were "the very dregs of Greenwich." In the end, no one could verify the dead woman's claim that the two young people had been lovers. The Lord Chief Justice told the jury there was "not a tittle" of evidence that the unborn child was Edward's. Edward was quickly acquitted to the "loud and thrilling cheers" of his friends but the verdict wasn't universally popular.

The radical press suggested that it was now open season for masters to rape and kill their servants. 4000 people marched on the Pook home to stage a grim tableaux vivante of the murder. Poole's father complained to the papers of being "hooted and yelled at in the public streets in a most frightful and disgraceful manner." The Times urged the public to direct its anger instead at the police whose mishandling of the case was as "as stupid as it was reprehensible"  The leaderwriter only wished that the detectives "had the acumen with which their class is credited in fiction."