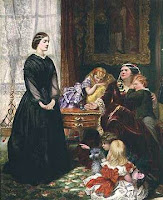 Mlle. Celestine Doudet is found guilty by a Paris jury of abusing the five daughters of a prominent English physician. In 1852, Dr. James Marsden of Malvern, a widower, hired Mlle. Doudet as governess for his girls, ages 7 to 14.

The Frenchwoman came with the highest references, literally, having been a wardrobe mistress to Queen Victoria. "I consider Mlle. Doudet an excellent person... worthy of confidence." Busy with his practice, the young doctor agreed to have his girls schooled abroad. Re-married in 1853, Dr. Marsden stopped in Paris on his honeymoon and approved of all of what he saw and heard of his daughters' care. Soon, however, he began receiving anonymous letters suggesting the girls were the victims of "fiendish persecution." Marsden initially dismissed it as meddling neighbors but when the notes continued, he crossed the Channel arriving shortly after the death of 10-year-old Mary Ann. The listed cause of death was bronchitis, but she had suffered a fractured skull which Mlle. Doudet said had been caused by a fall during a coughing fit.  The remaining Marsden girls begged to go home with their father.  Marsden dismissed Mile. Doudet and returned with his children to England, where Lucy, the eldest, soon died of "exhaustion."

Jealousy may have been the motive as the treatment of the girls got worse after Dr. Marsden's re-marriage. Mlle. Doudet was acquitted of the most serious charge of causing Mary Ann's death, Mlle. Doudet but received a five year sentence for her cruelty and abuse. Upon her release, she returned to caring for the children of others.
[The Governess by Emily Mary Osborn]
Posted by Tom Hughes at 5:57 AM