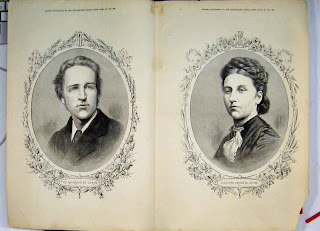 For the first time in over 350 years, a Royal Princess marries a subject. Princess Louise, Victoria's fourth daughter, weds the Marquis of Lorne, eldest son of the Duke of Argyll.

At first cool to her prospective son-in-law ("He has such a forward manner and such a disagreeable way of speaking..."), the Queen soon finds the marriage to her liking. She keeps "dear Loosy" close to home and bypasses the tiresome process of finding a suitable husband from the increasingly dissolute Royal houses of Europe. She writes, "I feel sure that new blood will strengthen the Throne, morally as well as physically." Even Parliament approved, noting that - for a change - the hefty dowry and annuity would be spent at home. Mr. Disraeli advised the Queen that the match is "as wise as it is romantic." The wedding is a grand show; the Highlanders fully arrayed in "the garb of old Gaul" and the Queen appears - as usual in widow's black - but brings out some serious jewels for the occasion.

Alas, the marriage was not a success. Louise, bossy by nature, was not terribly well-liked even within her family. It was rumored that the Princess was barren, while the Marquis, it is generally accepted, was homosexual. A scheme to send them to Canada, where Lorne served as Governor-General, in hopes that isolation might bring the couple together, only made matters worse. Louise lost most of an ear in a dreadful sleighing accident and they soon returned to England and separated. "That is all we can do," wrote the Queen, "She has taken a perfect aversion to poor Lorne." Divorce, of course, was out of the question, "very unsoignee" thought the Queen.

Only in her mid 30's, Louise was the subject of much gossip; most notably in 1890 when the noted sculptor Sir Joseph Boehm died in her arms in his Fulham Road studio, ostensibly from the strain of moving some statuary. Truth found the embarrassed Princess' explanation "incomprehensible." A niece once confided that Louise "ran after anything in trousers," then, so did the Marquis. Louise died in 1939 at age 91. Lorne, who had become the 9th Duke of Argyll in 1900, died of double-pneumonia in 1914.
Posted by Tom Hughes at 2:00 PM