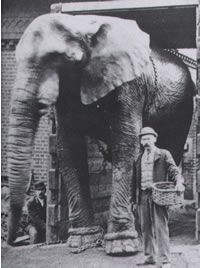 Jumbo, the popular, if temperamental, African elephant at the Regent's Park Zoo, after days of coaxing, grudgingly enters a huge, wheeled cage to begin a trip to America. The great beast had been purchased for $10,000 by the American showman, P.T. Barnum.

All England was outraged; The Graphic claimed "there is great lamentation in juvenile circles." The Royal Zoological Society defended the move.  Jumbo was old and cranky; zoo director A.B. Bartlett called Jumbo, "the most amiable but also the most dangerous animal I have ever known." Opponents mounted a vain legal effort.  The Daily Telegraph launched a fund-raising drive to outbid Barnum. But Barnum would not back down, cabling: "Jumbo's presence here imperative. Hundred thousand pounds would be no inducement to cancel purchase." The matter was even discussed in the House of Commons and serious men wondered whether Jumbo's fate might poison Anglo-American relations.

The Spectator dubbed it "Jumbo-mania ... Everybody talked elephants for a fortnight, elephants appeared on note-paper, on wall-paper, on anti-macassars, in ivory, in metal, in cakes, in butter, everywhere that they could possibly be placed and especially in inappropriate situations. One man, who ought to be fined, christened his son 'Jumbo.'"  Jumbo almost frustrates Barnum on his own. Efforts to get the elephant into the crate are accompanied by "loud trumpetings of dismay and anger." Alice, Jumbo's abandoned mate, is particularly distressed. The Daily Telegraph called it, "one of the most pathetic scenes in which a dumb animal was the chief actor."

It takes two days to convey the unwieldy pachydermic parcel to the docks at Milwall and aboard a well-provisioned ship (2 tons of hay, plus ample supplies of oats, biscuits and onions) for the voyage to the New World. All the attention works to Barnum's benefit; Jumbo "augmented our receipts during two weeks to such an extent as to considerably more than repay us for his purchase and subsequent expenses."

Jumbo was killed in a circus train accident in Canada in 1885. The ever-ready Barnum soon introduced his audiences to "Jumbo's widow."
Posted by Tom Hughes at 2:07 PM