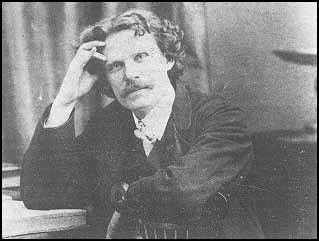 Britain's foremost "medium", Daniel Dunglas Home, faces an embarassing lawsuit filed by a 75-year old widow. Mrs. Jane Lyon claims she turned £60,000 over to the 35-year old "table-turner" while under his psychic sway.

Scottish-born, raised in America, Home claimed, among his varied "special powers," the ability to contact the dead. He'd held seances for Dickens, the Brownings, Napoleon III, and even compared notes with the Pope. In 1866, Mrs. Lyon came to his "Spiritual Athenaeum" on Sloane Street. Near his death in 1859, her husband had assured her he would speak to her in seven years. It took three visits, but Home reached the dearly departed. Through tablerappings, deciphered by Home, he said: "I love Daniel, he is to be your son." Almost at once, she transferred £24,000 to Home, noting "this is an entirely FREE GIFT!" The visits and rappings (and gifts) continued and soon - from beyond the grave - came an order to draft a new will naming Daniel Home-Lyon as beneficiary. Humbled and grateful, he agreed.

When a rival sage warned her she was being fleeced, Mrs. Lyon sued to save her fortune. Home's counsel argues the problems began only after the much younger Home had rejected her more than maternal "attentions." He introduces letters addressed to "My Darling" and witnesses to her alleged amorous conduct. The plaintiff's lawyer dismissed the theory as "disgusting." In truth, Mrs. Lyon is a rather pathetic figure; The Times thanked her, nonetheless, "for affording the public such an interesting psychological study." Yet, in the end, Vice-Chancellor Giffard orders Home to return it all, denouncing his activities as "most mischievous ... calculated on the one hand to control the believers in it and to assist the plans of the needy and the designing." The Illustrated London News labeled the entire proceedings ludicrous; "a place of justice being converted into a lecture room for a juggler."

Home survived the scandal. In fact, that December, several responsible people claimed they were there when he levitated out one third floor window and in another, high above Victoria Street!
Posted by Tom Hughes at 4:39 AM