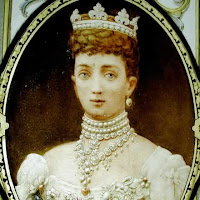 At Windsor Castle, the Prince of Wales marries Princess Alexandra of Schleswig-Holstein.

17 years old and an "outrageous beauty," (although in the Queen's words - "flat as a board") Alexandra had been selected after a thorough canvass of the courts of Europe. There were realpolitik concerns about the reaction in Prussia which coveted Schleswig-Holstein, for the moment part of Denmark. And there were some grumbles heard about Alexandra's mother's family, the Hesse-Cassels.  The dour Prince Albert had heard racy tales of their infamous parties at Rumpenheim, the family Schloss. But Bertie took to Alix immediately; the Queen found him "decidedly pleased." So, it was to be done.

Prince Albert's rather sudden death put romance on hold for over a year and the Queen's mourning still overshadows the otherwise joyous event. The night before, she took Bertie and Alix to Albert's grave for "his blessing." Without "the principal figure of all," Victoria finds the wedding day "most trying": "When I first heard the flourish of trumpets, which brought back to my mind my whole life of twenty years at his dear side, safe, proud, secure and happy, I felt as if I should faint. Only by a violent effort could I succeed in mastering my emotion."

The Queen wears black. Bertie, in his general's uniform, looks "more considerable than he is wont to do," according to one courtier. Alix, 20 minutes late, wears a gown of Honiton lace with an alarmingly long train. The Archbishop of Canterbury performs the service; Jenny Lind sings and the day's foremost artist, William Frith, sketches the grand scene for a command portrait. The guest list is 900; Disraeli gossiped to a friend about who is and isn't there, exulting, "But I am invited!" The future Kaiser Wilhelm II, Bertie's 4-year old nephew, misbehaves badly, calling his unamused grandmother, the Queen, an "old Duck."

Victoria skips the wedding luncheon, but appears at the window when the young couple leaves for a week at Osborne. Then, she repairs to Albert's tomb, where she feels "soothed and calmed."
Posted by Tom Hughes at 5:04 AM