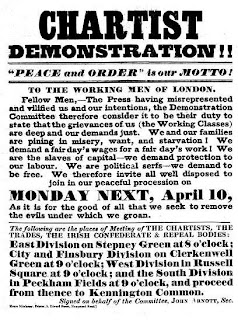 London is an armed and fearful city as the day of the great Chartist demonstration arrives.

Chartist leaders had predicted as many as a million people would march on Parliament to present their "Charter" demanding manhood suffrage, the secret ballot, and various economic and political reforms.

There is genuine concern that the revolutionary "Spirit of 48," which already toppled the French King, has crossed the Channel. The Queen, with a new baby but a fortnight old, has gone to Osborne. Professing unconcern, she writes, "Great events make me calm." The Duke of Wellington, now almost 80, commands a small army of special constables, vowing "It will end to the credit of the Government and the country." Displaying the talent for the defensive he developed in the Peninsular wars four decades before, he quickly secures the Thames bridges. Lord Palmerston went so far as to pass out muskets at the Foreign Office.

Across the river, a disappointing turnout of some 30,000 Chartists gathers at Kennington Common. A steady rain falls through the day, "the Queen's weather" no doubt. Amid the mud and general confusion, the Chartist leader Feargus O'Connor is cajoled by police to cancel the march and instead accept their personal escort to deliver his petitions by cab. At Westminster, the petition in four bundles is presented, filed and forgotten. The boasted five million signatures proves wildly overstated and many of the names - e.g. Victoria Rex! - are obvious frauds.

The day north of the Thames passes for a holiday, the stores are closed and the public enjoys itself at the expense of the motley "specials [whose] varieties of stature and dress forced upon the spectator associations of the comic." The day ends with but a few scuffles, a handful. of arrests, and more accolades for the great Duke.  The Queen declares, "What a pity he is not 59 instead of 79."

Chartism never recovered. The last time Chartists gathered in any numbers was, appropriately, for O'Connor's funeral in 1855. He'd gone mad three years before.
Posted by Tom Hughes at 4:56 AM