Her disastrous marriage unconsummated after six years, Euphemia Gray Ruskin leaves her husband. While she travels north to her family home in Perth, her attorneys call on the well-known artist & critic John Ruskin in London.  They arrive with two envelopes; in one, is her wedding band, and in the other, a suit for nullity of the marriage.

In March, Effie had written her parents of her situation: "I do not think that I am John Ruskin's Wife at all!" Recalling her wedding night (10 April 1848), Effie wrote: "The reason he did not make me his Wife was because he was disgusted with my person." In his response to the suit, Ruskin admitted as much, stating that his wife's body "was not formed to excite passion." While some biographers believe that Ruskin's fragile sensibilities were disarranged by Effie's unfortunately timed period on her honeymoon, others cite what can be called "body hair trauma." Accustomed solely to the hairless nudes of the canvas, Ruskin was not ready for the sight of pubic hair. 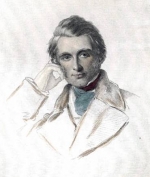 Psycho-analytic speculation aside, Ruskin soon declared that he married for companionship and children would only be a hindrance to his work. To a friend, he wrote, "I will not allow the main work of my life to be interfered with." The formalities proceed. Effie underwent an embarrassing medical exam to prove herself "virgo intacta." In a statement for his attorneys, Ruskin insisted his caresses had been rejected "as if I had been a wild beast." While expressing no wish to reconcile, he offered to demonstrate his "virility." He told friends he suffered from Rousseau's affliction, i.e. an addiction to masturbation. It was, however - so to speak -out of his hands.

An annulment was granted on grounds of Ruskin's "incurable impotency." A year later, Effie married Ruskin's protegee, John Everett Millais. Ruskin was accused, with little evidence, of having thrown Millais into his wife's company. Admittedly, the three spent several months together in Scotland and the young artist could hardly fail to notice the nature of the Ruskin's marriage and he and Effie were soon in love. Ruskin wrote spitefully: "If there is anything like visible retribution in the affairs of this life, there are assuredly dark hours in the distance for her to whom he has chosen to bind his life."