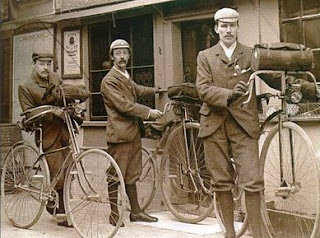 A letter-writer signing himself "Pedestrian, London, W." complains to The Times that the growing number of cyclists is resulting in a "Tyranny of the Road." The new pneumatic tire has ended the era of the aptly named "boneshaker" and made speed possible. "Pedestrian" complains that his country walks are now regularly interrupted by hurtling wheelmen like a horde of Apache or Sioux Indians, conches shrieking and bells ringing and woe betide the luckless man or aught else coming in their way ... Can nothing be done?"  He proposes a 6 mph speed limit.

The letter prompts a flurry of correspondence. "Two Sisters from Fulham" complain of being terrorized by cyclists.  When they made a remark, they were greeted with "impertinent leers and frivolous remarks." Taking leave of his "velocipede" long enough to respond, E.A.P. fires back that cyclists "not only have to avoid being run over by vehicles but also to avoid running over pedestrians, the latter seeming to go out of their way to afford facilities in that direction."

The letter-writing battle raged for weeks. The Times, opposing speed limits, thought two-legged and two-wheeled ramblers could equally enjoy the quaint countryside, if cyclists might go "at a pace which would enable them to use their eyes." The courts quickly applied the "furious driving'' statutes, drawn up for coachmen, to speeding cyclists who soon became known as "scorchers."

Punch contributed a gleeful ode on the subject:


I mean to go spinning, and 'owling and grinning,
At twelve mile an hour through the thick of the throng.
And shout, without stopping, whilst frightened and flopping,
My elderly victims like ninepins are dropping,
"So long!"

Photo: Cycling History
Posted by Tom Hughes at 5:40 AM