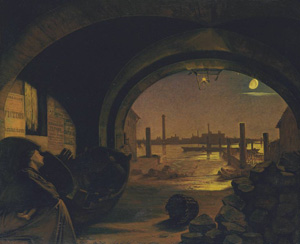 To the relief of almost everyone, 40-year old Mary Furley will not hang. The miserable woman had tried to drown herself and her child in Regent's Canal. A passing boatman - hearing a woman's moans - rescued Mary but the little boy was never seen again.

At her trial, Mary Furley's story became clear. Abandoned by her husband, she had been sent to the Bethnal Green workhouse. While there, her child had gotten lice in his hair,  A drunken barber employed to shave the lad cut him badly.  Mary fled the workhouse and sought work as a needlewoman. Her first meager earnings had been promptly stolen. Faced with a return to the workhouse, she said "I preferred death for myself and my child."

Her pathetic tale notwithstanding, Mary Furley was sentenced to die for infanticide. Sent to hang at Newgate, she was advised to "turn your mind to your spiritual affairs." The Times was merely the most prominent voice urging mercy: "No, the rich, the respectable, the comfortable members of society cannot imagine, cannot picture to themselves, a condition so deplorably miserable as to prompt a woman to
infanticide. Let them be thankful that they cannot; but let them show their humility and their gratitude by judging lightly of a fellow creature.'

On 26 April, Mary was informed that all pleas for mercy had been considered and rejected; her execution would take place on 8 May. She collapsed in her cell, "insensible with grief." The very next day, however, she was told Her Majesty "had been pleased" to respite her sentence. Punch called it "capriciously wicked" and attacked the Government: "In the name of outraged humanity, in the name of a most miserable woman, scourged to agony and madness by the cruelty of unmerited ill-fortune, we ask [the Home Secretary] wherefore this atrocity was committed? Did he not know the wretchedness, more complete in its horror than any labored tale of fiction, that step by step had scourged the woman from the workhouse to the river's brink?"

Mary Furley was ordered transported to Australia for a period of seven years. The Examiner asks: "If such be the Royal clemency, what is the rigor?"
Posted by Tom Hughes at 1:21 PM