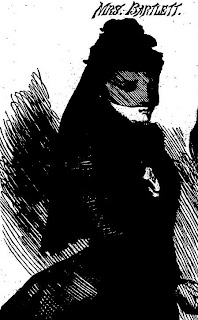 Adelaide Bartlett stands trial for poisoning her husband Edwin, a successful London grocer. Life was rather odd in the Bartlett home above the store in Pimlico.  Their marriage had been arranged and after ten years, at least according to Adelaide, they had made love just once.

In late 1885, Rev. George Dyson, their Wesleyan minister, began calling upon Adelaide, with Edwin's knowledge and encouragement. In December, Bartlett fell ill with severe pain in his jaw.  His dentist decided to saw the teeth to the gumline, prior to extraction.  (British dentistry?)  After the removal of eighteen teeth, Edwin was well enough New Year's Eve to enjoy a full meal. The following morning, he was found dead in his bed. An autopsy detected the strong presence of chloroform.  Adelaide suggested that her husband, depressed by his poor health, may have taken a fatal draught of chloroform and brandy.

Police soon discovered that the chloroform had been purchased by the Rev. Dyson who, not very gallantly, protested that he had been "duped by a wicked woman." Adelaide is charged with murder. Dyson, briefly held as an accessory, was freed to the hisses of most who felt his conduct had been unmanly. For her defense, Adelaide managed to afford Britain's best, the redoubtable Sir Edward Clarke. In his memoirs, Clarke revealed that the grocer's wife was "the unacknowledged, daughter of an Englishman in good social position" who paid all her legal bills. Sir Edward brilliantly sculpted the suicide defense. Who forced Edwin to take the fatal drink? Why hadn't he cried out for help from the servants? Edwin Bartlett was often depressed and talked of suicide. He'd been heard to say that "no doubt" Dyson will take care of Adelaide. In excruciating pain, knowing his wife had found sexual companionship with a man he respected, Bartlett, argues Sir Edward, decided to end it all.

The "not guilty" verdict is a popular one and Clarke is cheered in the streets. As for Adelaide, she disappeared, to America most likely. There were doubters then as now; the Queen's personal physician quipped, "In the interests of science, she should tell us how she did it.''
Posted by Tom Hughes at 5:11 AM