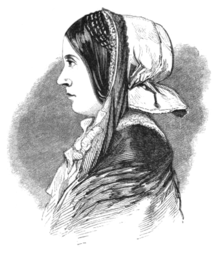 Emile L'Angelier, a 10 shilling a week clerk, is found dead in his Glasgow lodgings. An autopsy found 82 grains of arsenic in his stomach.  Police inquiries led to Madeleine Smith, the beautiful young daughter of a prominent architect.

For more than a year, Madelaine and Emile, due to her family's opposition, had been clandestine lovers. However, while her ardor had cooled, his had not. Sending letters through compliant servants at the Smith home, Emile besieged her with plaintive appeals, followed by jealous complaints and, finally, threats; "Fancy if they knew." In early 1857, engaged to a more suitable mate, Madelaine demanded Emile end their affair and begged, "As you hope for mercy on the judgement day, do not inform on me. Do not make me a public shame."

The question dominating Madeleine's nine-day trial was whether it was murder or did the lovelorn Frenchman take his own life, hoping to make it appear she poisoned him. While she freely admitted buying arsenic, Madeleine claimed it was for cosmetic uses. The defense underlined the fact that there was no evidence she met with Emile the day of his death. The dead man's notebook, with entries such as. "Thursday, 19th Feb., Saw Mimi a few moments. Was very ill during the night" was ruled inadmissible. The notes ended nine days before his death. In the end, the jury returned with the unique Scottish verdict of "Not Proven."

In F. Tennyson Jesse's modern analysis of the case, he concluded that after the pro-Madeleineites and the anti Madeleineites, you're left with the much larger group, those who conclude, "She probably did it, but he deserved it." Praised by even her doubters for her "extraordinary nerve" throughout, Madeleine left the courtroom to great cheers.

She could not remain in Scotland. She told a friend that during and immediately after the trial she received "several hundred letters, all from gentlemen," offering proposals of matrimony or employment. She chose instead to seek the anonymity of London where she later married an associate of William Morris, George Wardle. After his death, she left for America where she died in 1928.
Posted by Tom Hughes at 2:11 PM