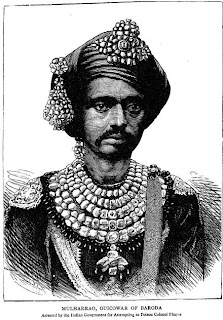 "The odious Gaekwar of Baroda" is deposed by order of the Viceroy of India, Lord Northbrook. Described as "a debauchee and an imbecile," Mulhar Rao is charged with "notorious misconduct and gross misgovernment." The Viceroy took his action despite the verdict in one of the most sensational state trials in the history of the Raj.

The British resident in the principality, Col. Phayre, had accused the Gaekwar of trying to have him poisoned. Believing the evidence to be strong, the Viceroy seized the opportunity. Proclaiming the fairness of British justice - he named a six-judge panel, three Europeans and three Indians to hear the charge. In addition, Serjeant Ballantine, one of the leading barristers at London's Old Bailey was sent out to handle the Gaekwar's defense at government expense.

Col. Phayre testified that, on one afternoon the previous November, his daily dish of pummelo sherbet had given him "a most unusual sickness of stomach." Traces of arsenic and diamond dust were found; the latter, by native legend, was a virulent poison but harmless. Ballantine focused his defense on the accuser, claiming Phayre was "fussy, meddlesome and thoroughly injudicious'' and he was "greedy to listen to every accusation against the Gaekwar." Ballantine conceded that the Gaekwar had many enemies.  He suggested that any of them might have tried to poison Phayre and then frame frame the Gaekwar for his murder.  In the end, the panel of judges split, all the Europeans for conviction, all the natives for acquittal. No surprise; one English sceptic harrumphed "It was like relying on a Jesuit ... where the Pope was concerned."

The Viceroy's hopes were frustrated and he dithered for weeks. Finally, ignoring the verdict, he sacks the nettlesome Gaekwar anyway. The Spectator thought it was a mistake, "It is impossible to be satisfied with a decision which seems to involve a breach of faith." The Times called it a "mischievous blunder" even if the Empire is rid of "one of the worst specimens of one of the worst types of humanity - an Eastern Prince."

The exiled Gaekwar died unmourned while his infant successor, Sayaji Rao, lived until 1939, hailed as "one of the most enlightened of the Indian princes."
Posted by Tom Hughes at 5:22 AM