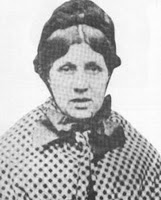 Mary Ann Cotton is convicted of the murder of her 8-year old stepson. Forget Jack the Ripper, the Yorkshire Ripper, or any of the other mass murderers in British history, Mary Ann Cotton stands alone as the deadliest. Linked at the time to three other deaths, in all, she may have been responsible for as many as twenty.

40 years old and "comely in appearance," Mrs. Cotton resided in the remote northern village of West Auckland, near Durham. The little boy had died the previous July of what a sceptical doctor wrote off as "gastric fever." When Mrs. Cotton quickly cashed an insurance policy (£4 10s with the Prudential), the doctor went to the authorities who ordered the boy's body exhumed.  The autopsy revealed the presence of arsenic. Suddenly, rather tardy questions were raised about other recent deaths in the Cotton home.  Another stepson and her own infant son, as well as a lodger, had all died within the past year. More exhumations; same verdicts.

The investigation deepened, fueled by gossip, revealing a horrifying trail of death. The best estimate is that she killed 4 husbands, 12 step-children, 2 children of her own and the lodger whom she had cordially agreed to make husband number five. The cause of death was uniformly "gastric fever."

At her trial, Mary Ann's lawyers raise the forlorn argument that the recent deaths - the only ones then before the court - were caused by her household use of an arsenic-soap.  They also pointed to the presence of dust in the house that had flaked from the green wallpaper, colored with an arsenic-based dye. The jury, unimpressed with the science, speedily convicted her.  Sentenced to die, Mary Ann faints and must be carried from the crowded courtroom. She was hanged on 24 March.

For those who thought about such things at all, the question was - even given the randomness of death in rural England in the mid 19th Century, with fever and epidemic so common - how had she gotten away with this? The Spectator concluded:  "This is really the horror of these cases - that there is no visible sign to repel their victims from beings so utterly devoid of compassion - that they look much like other human beings while carrying about a fixed purpose and habit of murder in their hearts."

Photograph from mensrightsboard.blogspot.com
Posted by Tom Hughes at 4:27 AM