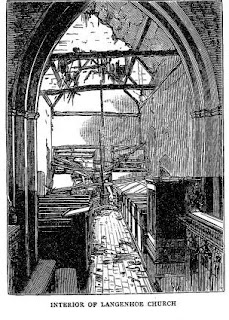 At 9:20 in the morning, the worst earthquake since Elizabethan times rumbles across south-east England. Centered in Essex, near the mouth of the River Colne, the quake all but flattened several remote villages. In Langenhoe, the old village church came down (right). Two people died, a child killed by fallen debris and an invalid who simply died of fright.

A resident of Witham -some ten miles away from the center of the quake - wrote The Times to describe the experience.  "I heard a noise which I can only compare to the rumbling of the Underground railway combined with the rushing of a strong wind."  In London, fifty miles away, the quake catches several workmen atop the Victoria Tower at Westminster. They were reported to be "greatly alarmed at the sudden undulatory motion [and] collected together in amazement." The Superintendent of the Works reports the tower swayed four inches out of perpendicular.

An inspector from London reported that it was "almost impossible, either by description or illustration, to convey to the public generally the immense extent of the damage."  The so-called "Essex quake" is linked with the massive Pacific quake at Krakatoa the previous August and a major quake at Madrid the following December. Scientists conclude "a general though slight realignment of earth pressure is taking place."

A Mansion House fund soon raised over £10,000 pounds for the villagers left homeless. The benevolence of the English public is once again recognized, although some London publicans may have felt otherwise. According to Punch, in the Strand numerous persons who had been taking their morning draught at various liquidational establishments, rushed out of these places in so great a hurry that they forgot to pay for the refreshment they had consumed. "This has fixed the time of the event on the minds of the proprietors of these places."
Posted by Tom Hughes at 5:08 AM